Izmir to Istanbul, Istanbul to Almaty, Almaty to Shymkent. That was the journey we embarked on a few weeks ago to the wonderful land of Kazakhstan, a country full of surprises…I’m so happy that we were invited by the Kazakhstan Tourism board to experience a real taste of this wonderful country because I had only really heard of Kazakhstan from the British tv show Borat, a fictional character that pretends to be a journalist from Kazakhstan. It’s absolutely hilarious but bears little resemblance to the real Kazakhstan as I learnt over the course of my 9 days there…

We arrived at Almaty airport at 7 in the morning and were greeted by our co-ordinator Aigul. As we had such a delay on our flight from Istanbul, they were calling out for the final boarding for our next flight to Shymkent. Sleepily, we ran through the airport meeting a couple of our team mates along the way and just managing to make our next flight on time.

When we landed in Shymkent we had a 2 hour drive to our destination of the Aksu-Zhabagly Nature Reserve. Little did I know as I fell asleep 5 minutes into the journey that that would be the last moment of internet we would have for an entire 2 days.

After 2 hours we pulled up to a resort at the foot of the mountains. It was a former Soviet summer camp. Not necessarily the 5 star hotels i’m used to, but it was authentic. It had a swimming pool, cabin-like rooms and a restaurant serving delicious Kazakh food. 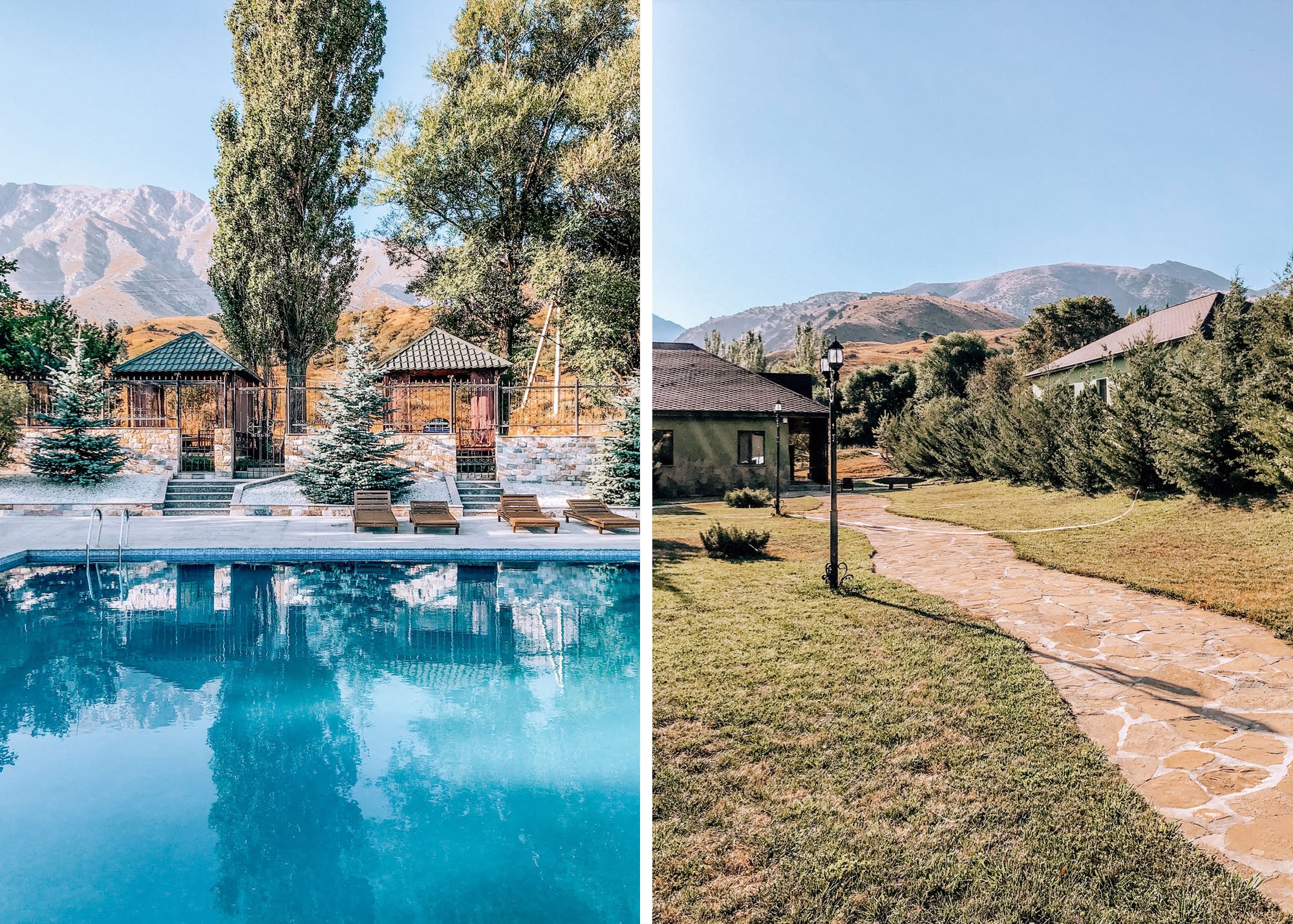 After we had freshened up, we all met up for lunch in the resort’s restaurant where we feasted on mampar soup and fresh bread. Our group consisted of Nishit and Kritika from India, Dan from Canada, Yosh and Vins from the Philippines, Aigul and Dina from Kazakhstan and myself and Umit.

We had some hiking planned for that afternoon so along with our guide, Rustem, we piled into a minivan to start the journey into the Nature Reserve. The Aksu-Zhabagly Nature Reserve is the oldest nature reserve in Central Asia. As I was running on no sleep, the thought of hiking could not be further from what i’d rather have been doing which is crawling into bed, but once we were out in the fresh mountain air, wind in our hair I forgot about my tiredness and enjoyed the spectacular views all around. 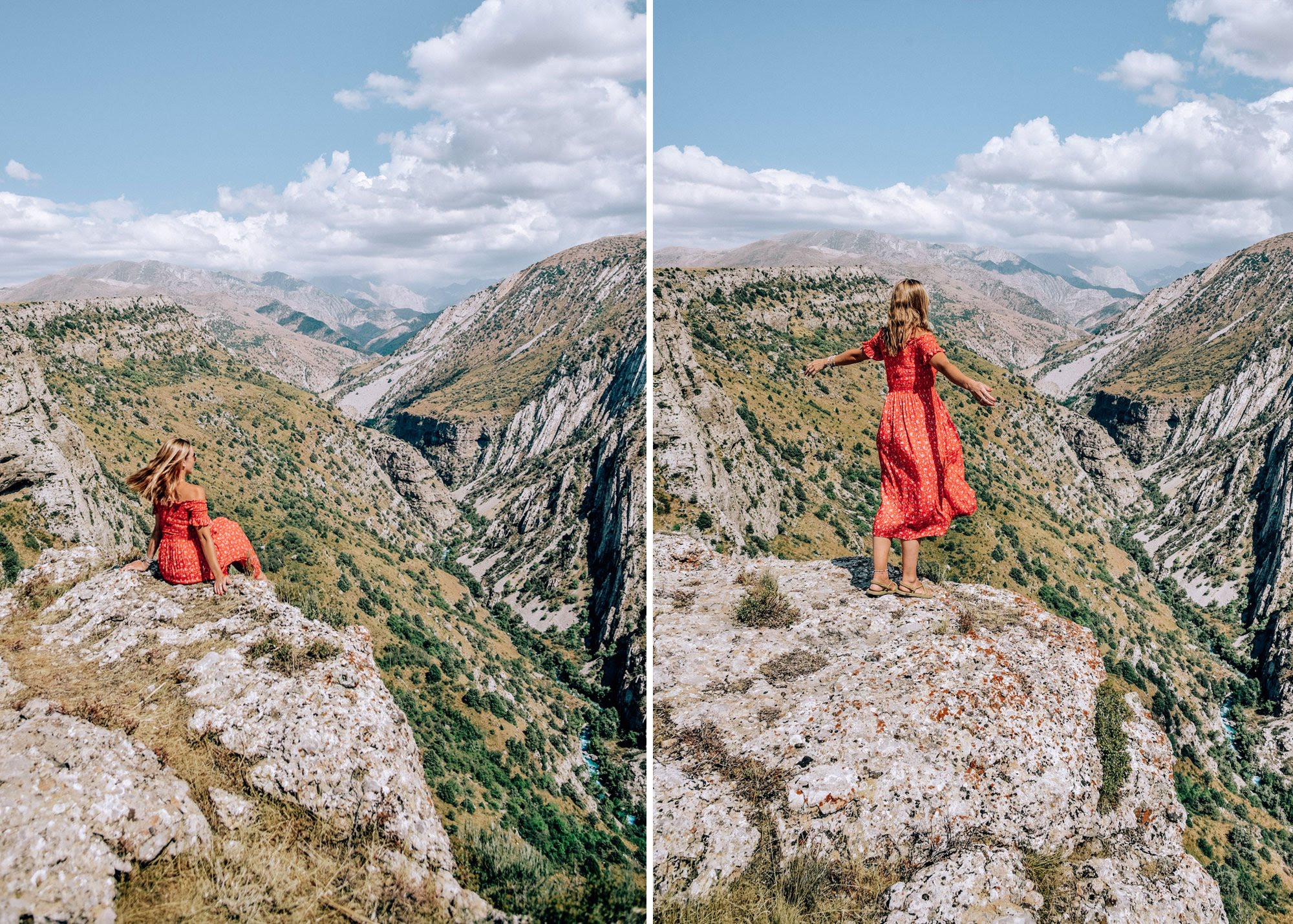 The territory of the nature reserve encompasses diverse landscapes, from meadows, to juniper forests, glaciers to gorges with snow capped mountains shining bright in the distance. It really is breathtakingly beautiful and it was, for me, the most surprising and enjoyable area out of all the places we visited during our time in Kazakhstan. I would love to go back in Spring when it’s full of wild tulips. Not many people (including me before I went) know that tulips actually come from Kazakhstan!

Wolves and bears roam the reserve but even though I kept my eyes open for them, I never spotted any. Apparently snow leopards also call the high mountains of the Aksu-Zhabagly Nature Reserve home (as well as a yeti haha) but neither of which we saw. After we had ooh-ed and ahh-ed over the stunning views, droned from all angles and had 1 dress change in the back of the van, it was time to hike down to the Aksu River below. 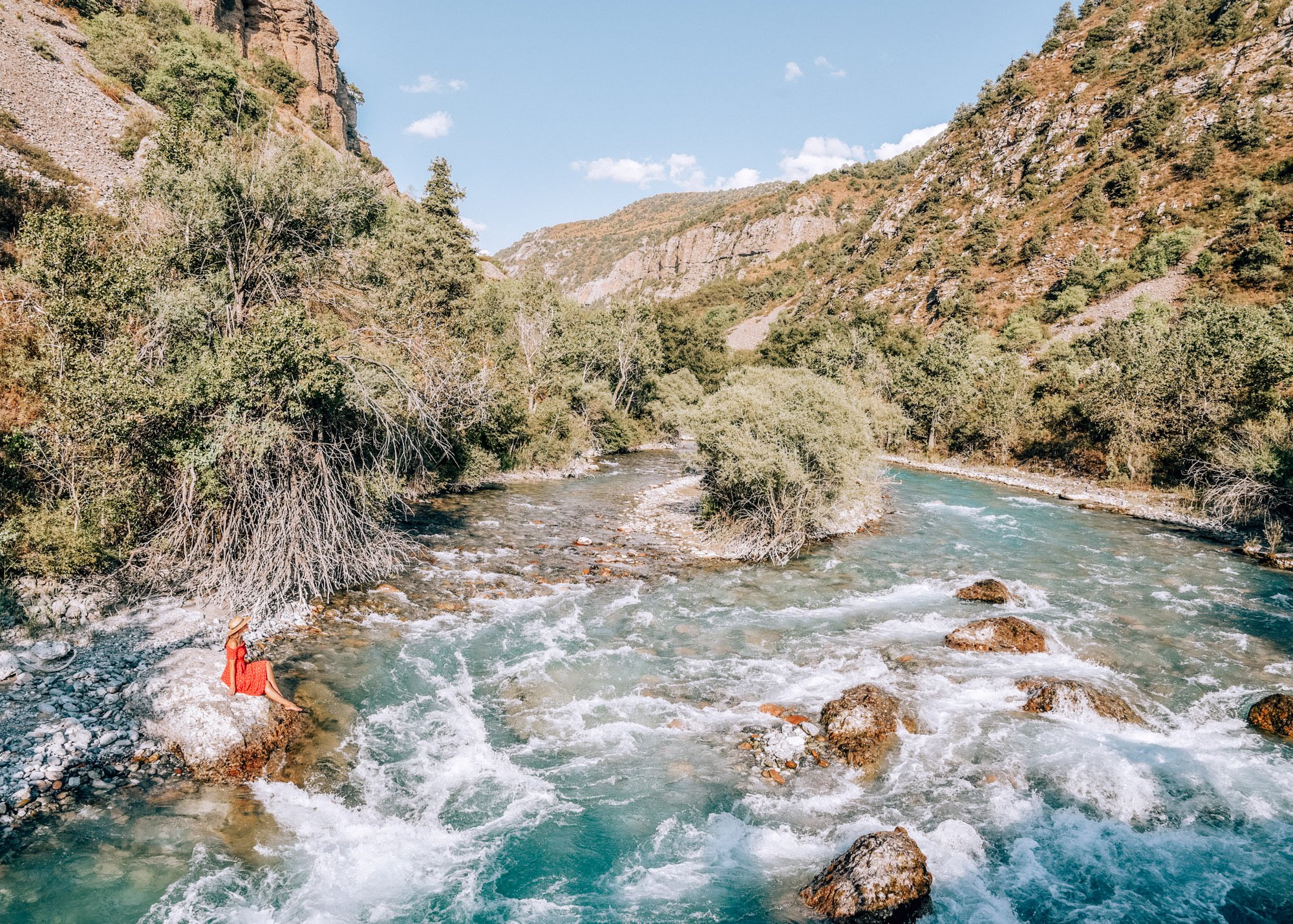 Once we were at the bottom and had taken a few (hundred) photos, we enjoyed a picnic perched on a rock, legs dangling into the ice cold river.  A funny nickname I was once given by a Bedouin in Petra, Jordan is ‘mountain goat’ as i’m pretty speedy in getting down a mountain no matter the terrain. The thing I always forget when i’m going down is just how difficult climbing back up it will be! We definitely deserved the Shymkent beer we had later that night! 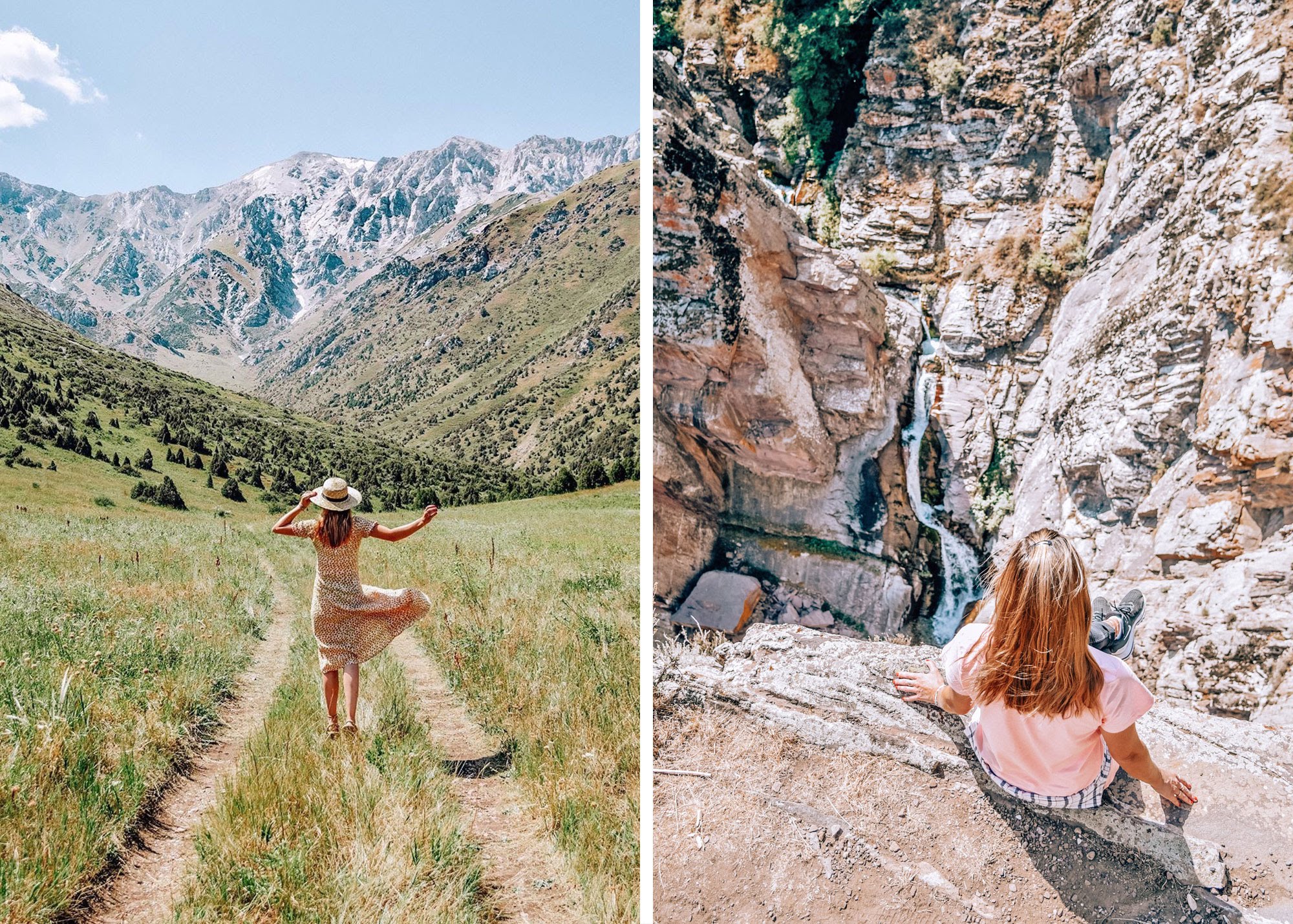 After a wonderful nights sleep we had another full day of exploring the nature reserve planned. We jumped into old jeeps that took us up into a different area of the nature reserve for a day of off road adventure. We visited Kshi Kaindy waterfall, the Ulken Kaindy gorge, had a picnic with 360 degree views of unspoilt nature and then hiked up to some petroglyphs from the Bronze Age. 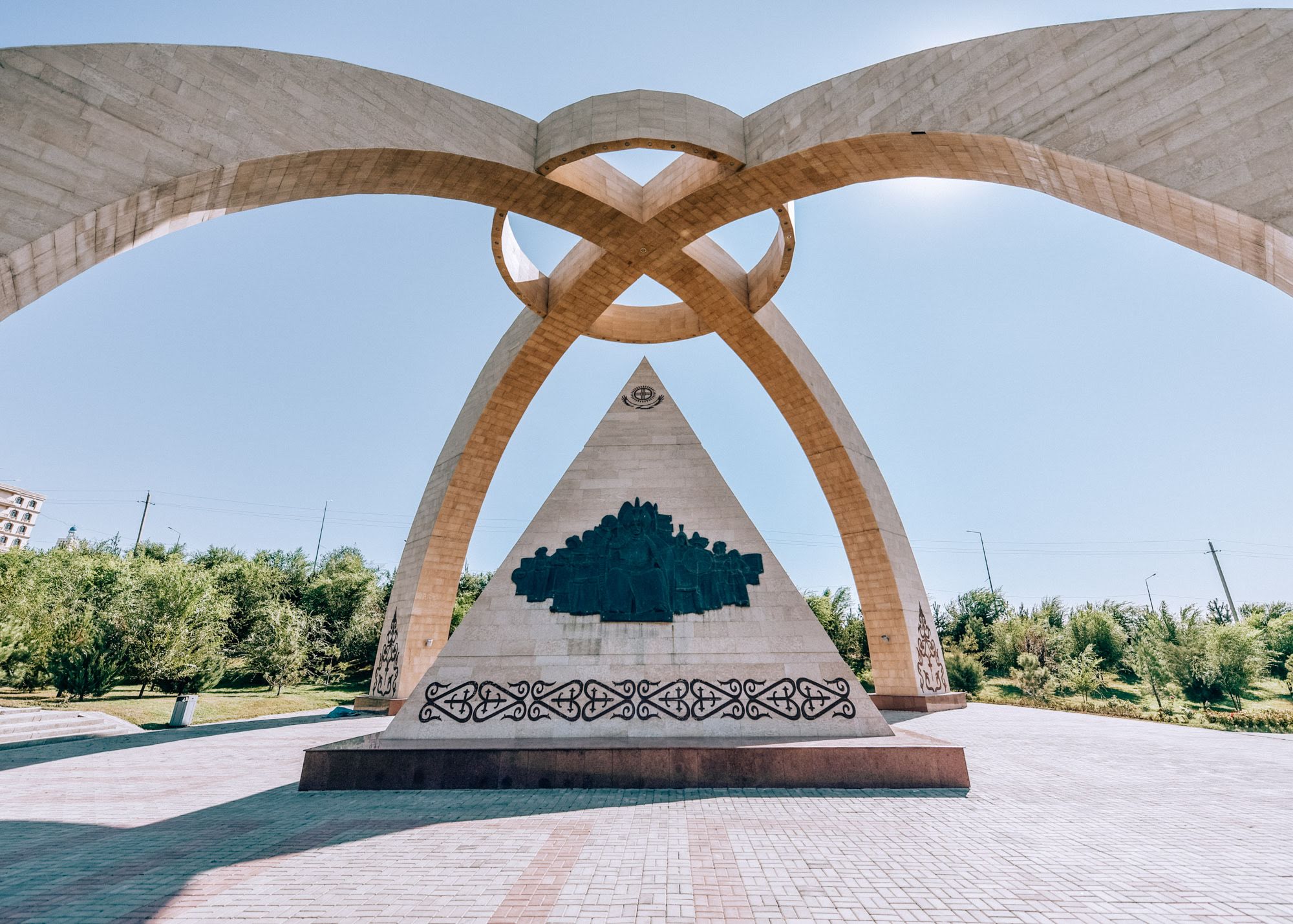 After a couple of days in the mountains it was time to head back to civilisation and the city of Shymkent. First up we visited the Baydibek Karashauly monument, followed by the Museum of Regional History and a stroll around the Dendropark. Built in 1980 on the site of a former waste dump, the Dendropark is the largest park in Shymkent. This arboretum covers more than 120 hectares and includes more than 600 varieties of Eurasian trees and plants, it’s such a peaceful space in the middle of the hustle and bustle of the city.

In Shymkent we swapped our humble mountain cabin for the luxury 5 star Rixos hotel. It was beautiful and modern with a pool, spa (complete with snow room, saunas and a Turkish bath) and luxurious rooms… 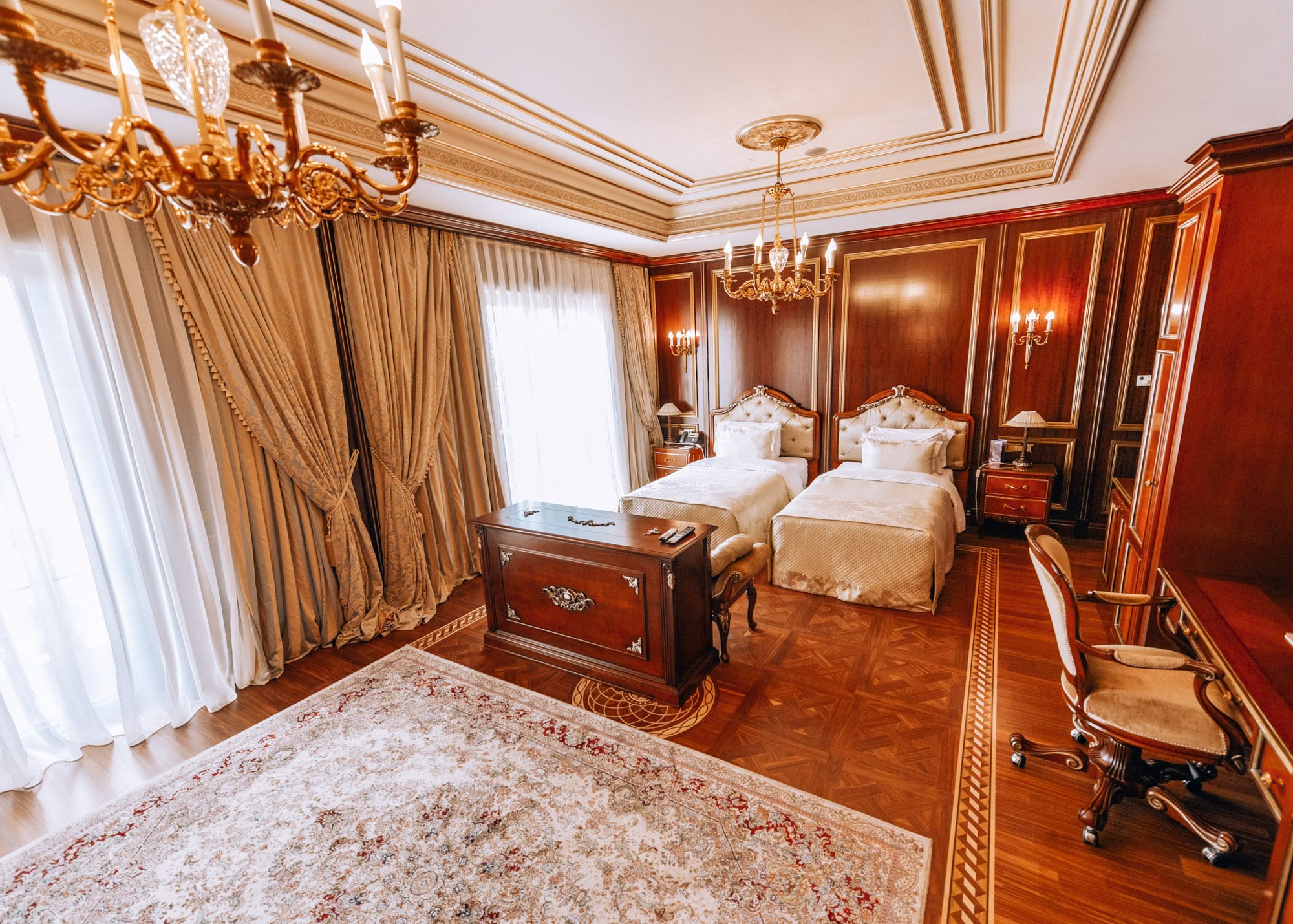 Although all I wanted to do was relax, we headed straight out to explore the area and do a bit of shopping at Shymkent Plaza. My favourite area of Shymkent, however, was Arbat. This is a lovely pedestrian only street in the center of the city. There’s an upside down house, a ferris wheel, street performers, cafes, musicians and hanging umbrellas which light up in all the colours of the rainbow when it gets dark. 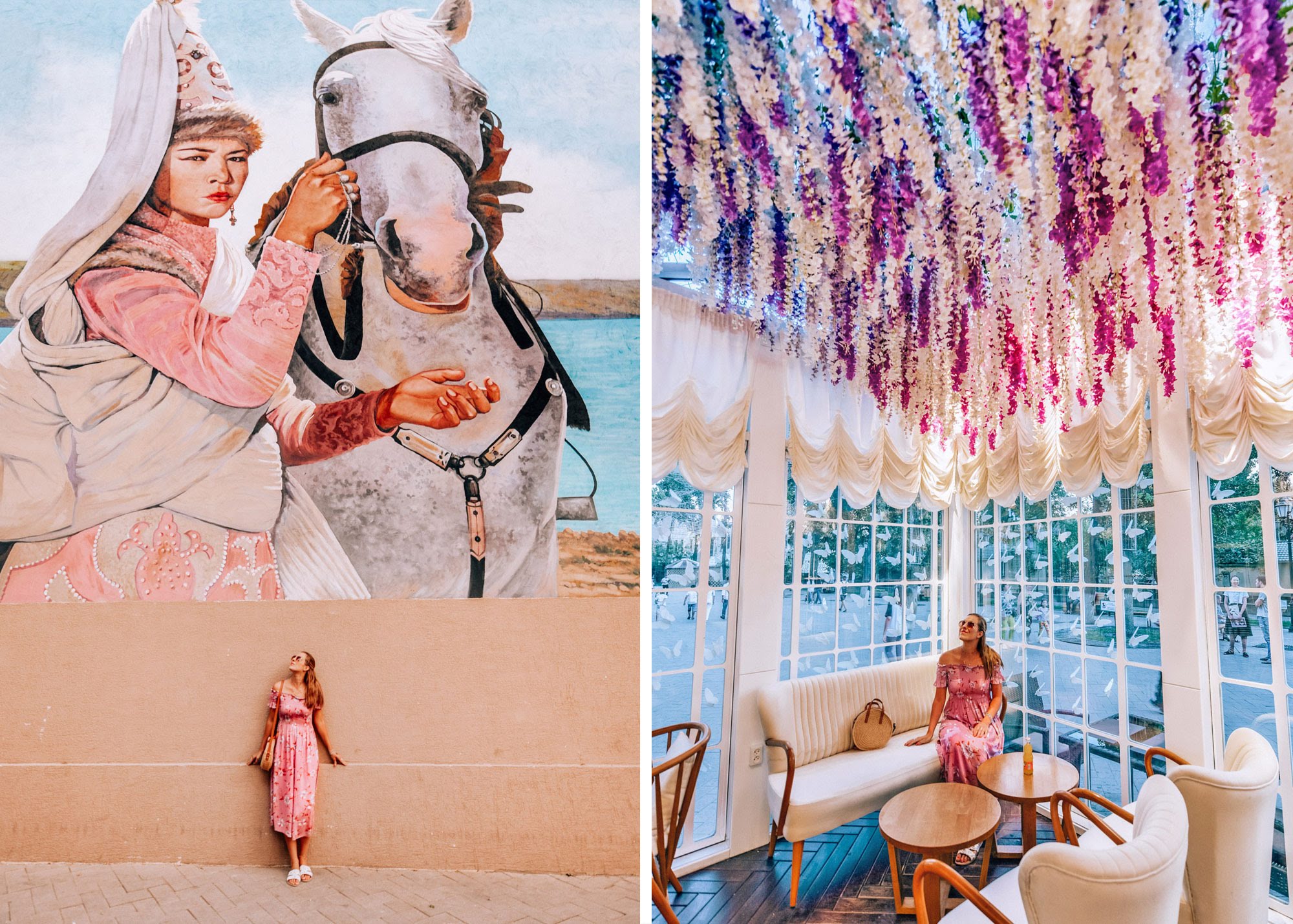 We strolled along taking in the sights and sounds before heading to Mimino restaurant where we feasted on delicious Georgian food and homemade wine.

The next day we drove 160km towards Turkistan, a city which was founded over 15 centuries ago. 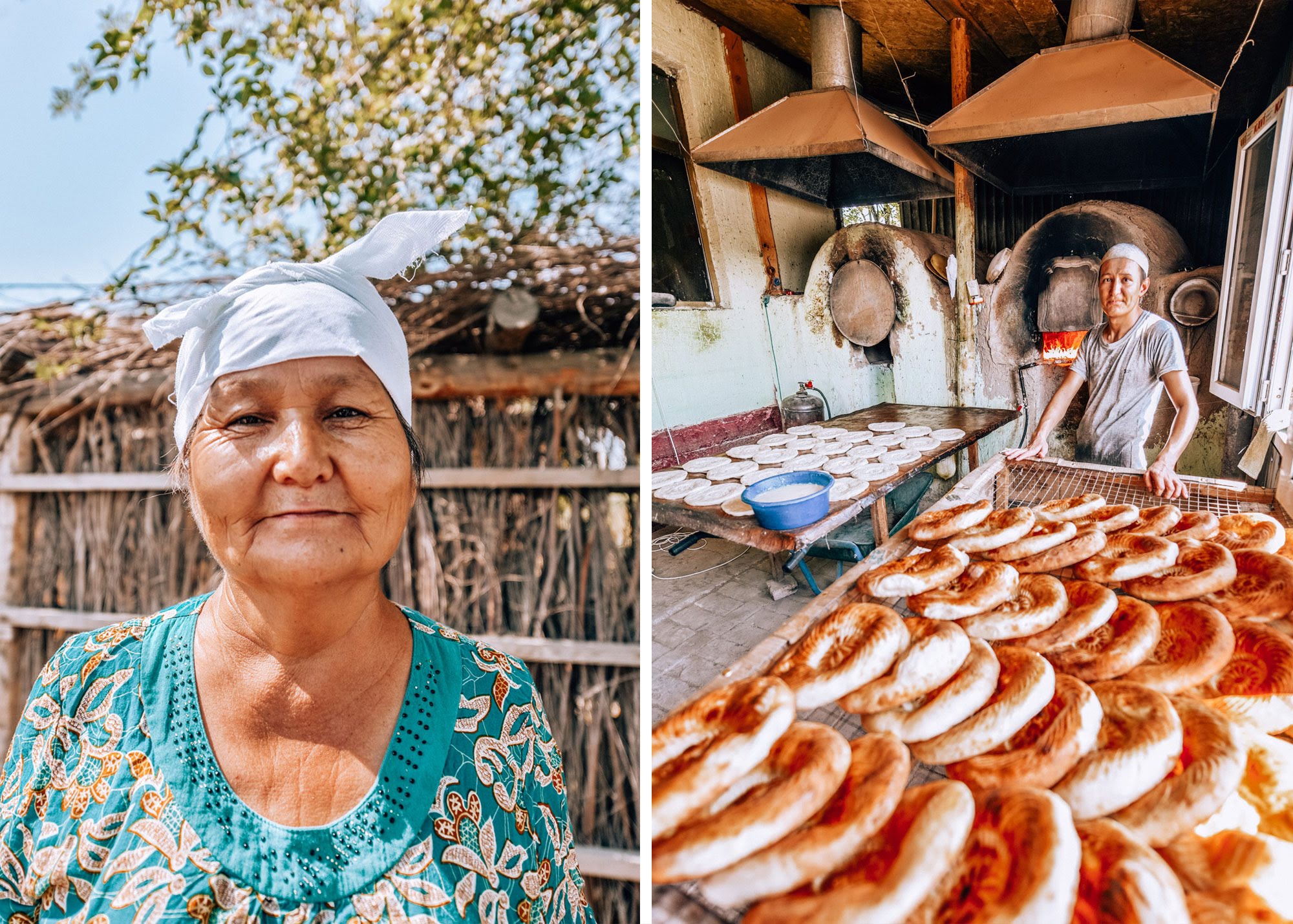 It took us awhile to get there as we stopped many times on the way, to take photos, to visit a Kazakh bakery where we tried piping hot tandyr nan bread and to see the ruins of Otrar, a once-prosperous Silk Road town destroyed by Genghis Khan in the 13 century. 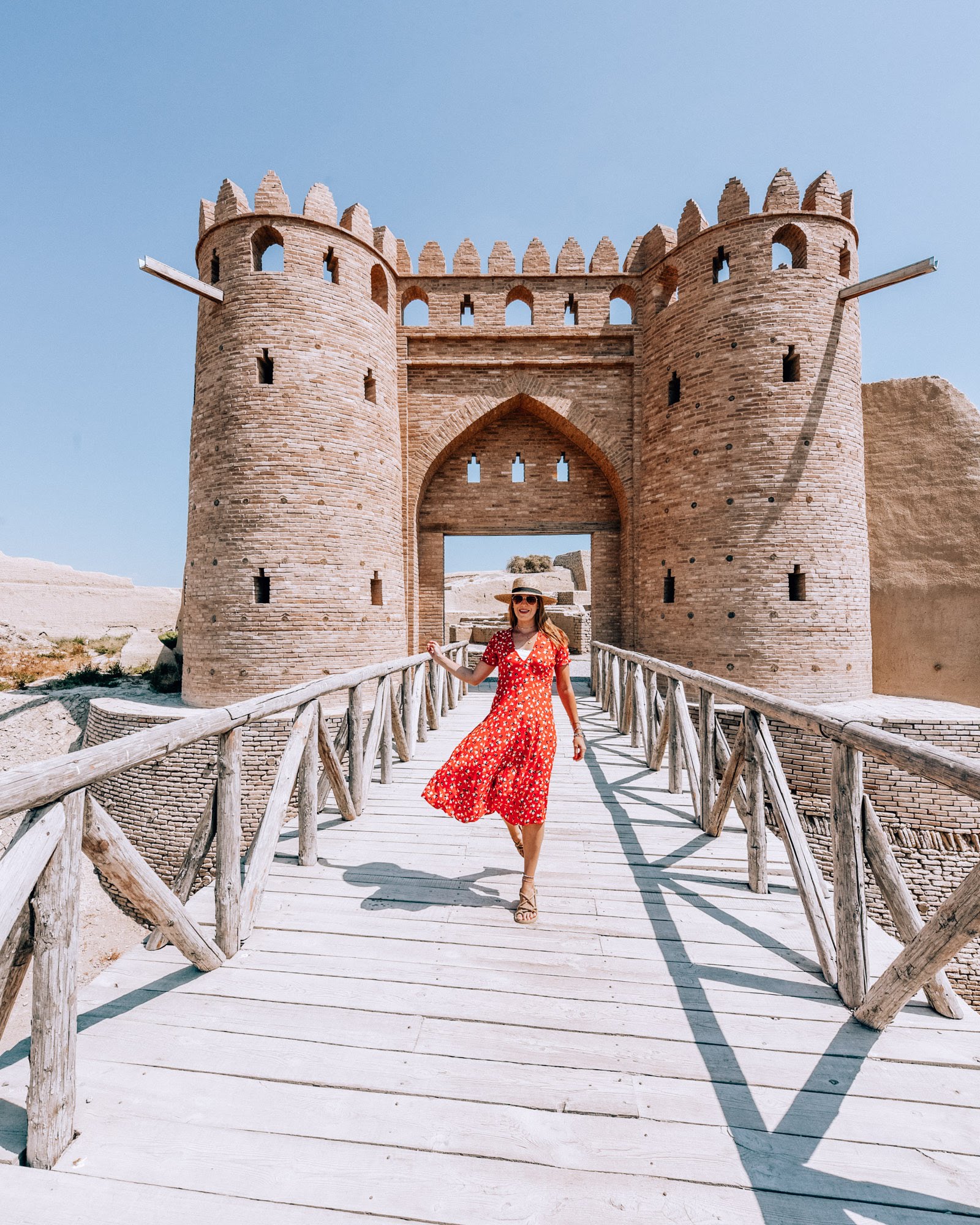 We ate lunch in a traditional Kazakhstan family home where we tried manti (which was different to the Turkish version)  It was a great experience to eat their local food and spend time with the family. They had an eagle, a taz (a Kazakh hunting dog) and the cutest kids that were dressed in tradition Kazakh outfits. 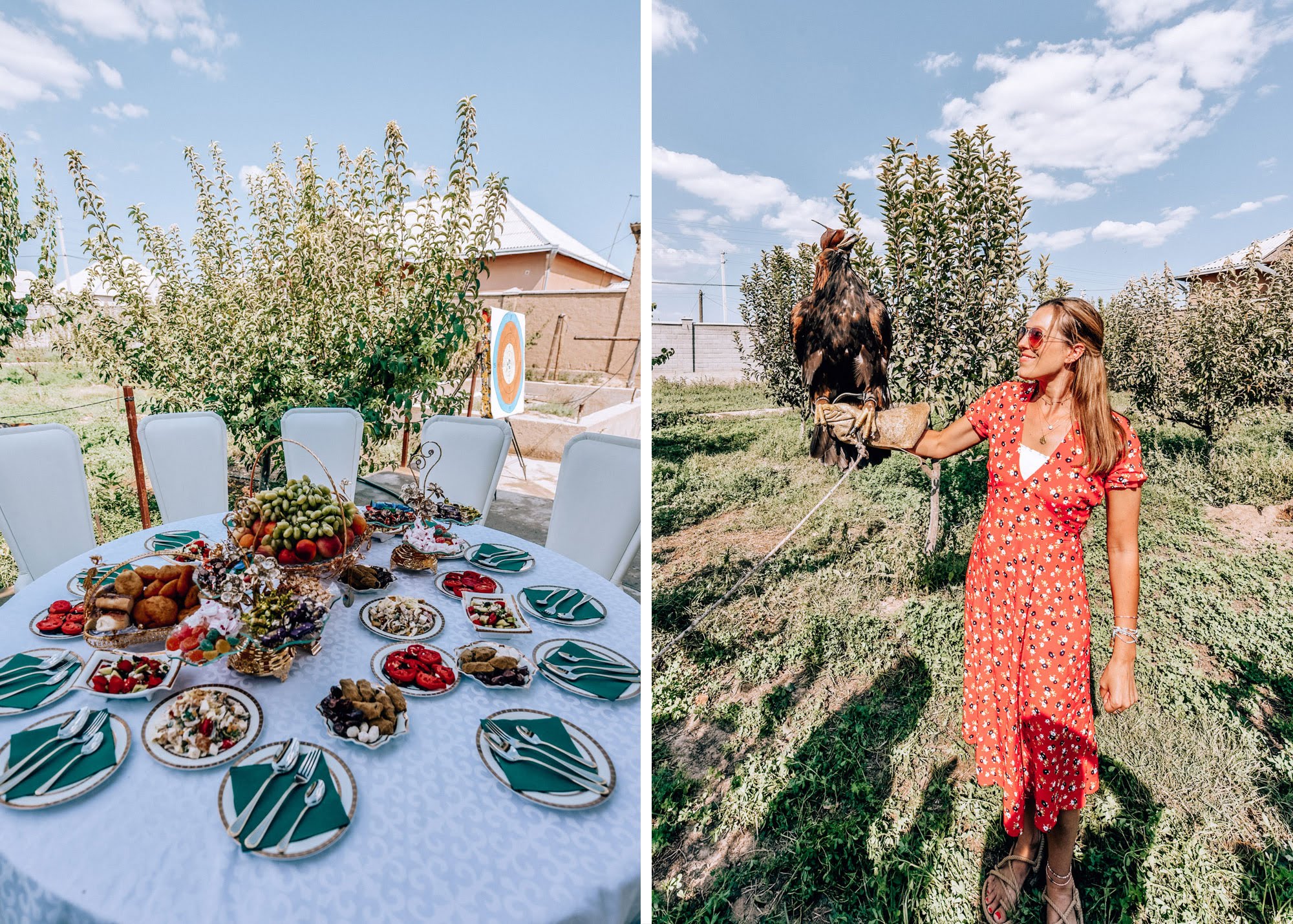 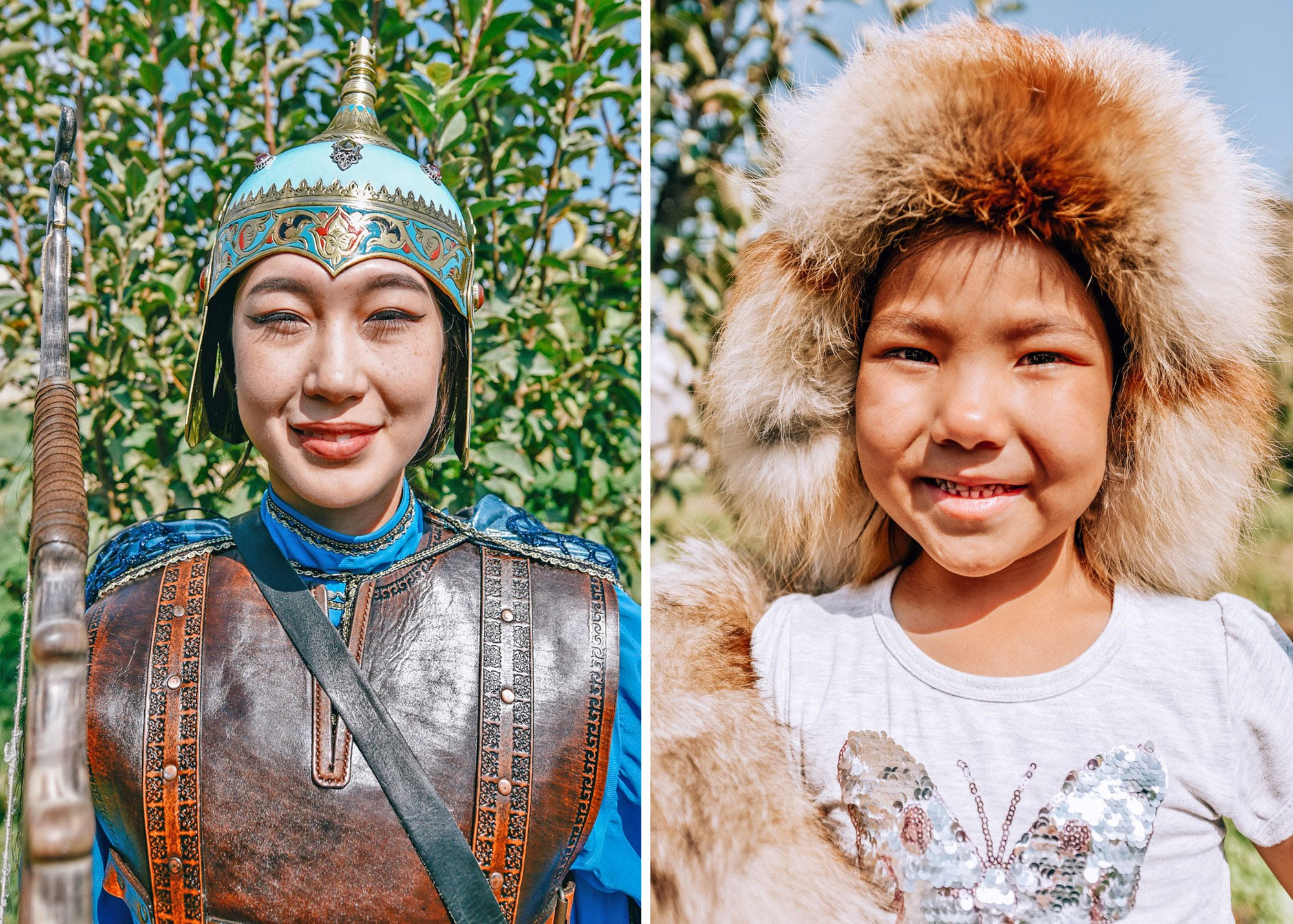 Turkistan is at the heart of Kazakhstan’s silk road and one of the best places to get a feeling of this time. The highlight of the 2 days we spent there was visiting the beautiful Mausoleum of Khoja Ahmed Yasawi.

Ahmed Yasawi was a famous Turkic poet and Sufi mystic that made considerable efforts to spread Islam throughout Central Asia and his mausoleum attracts thousands of pilgrims each year. 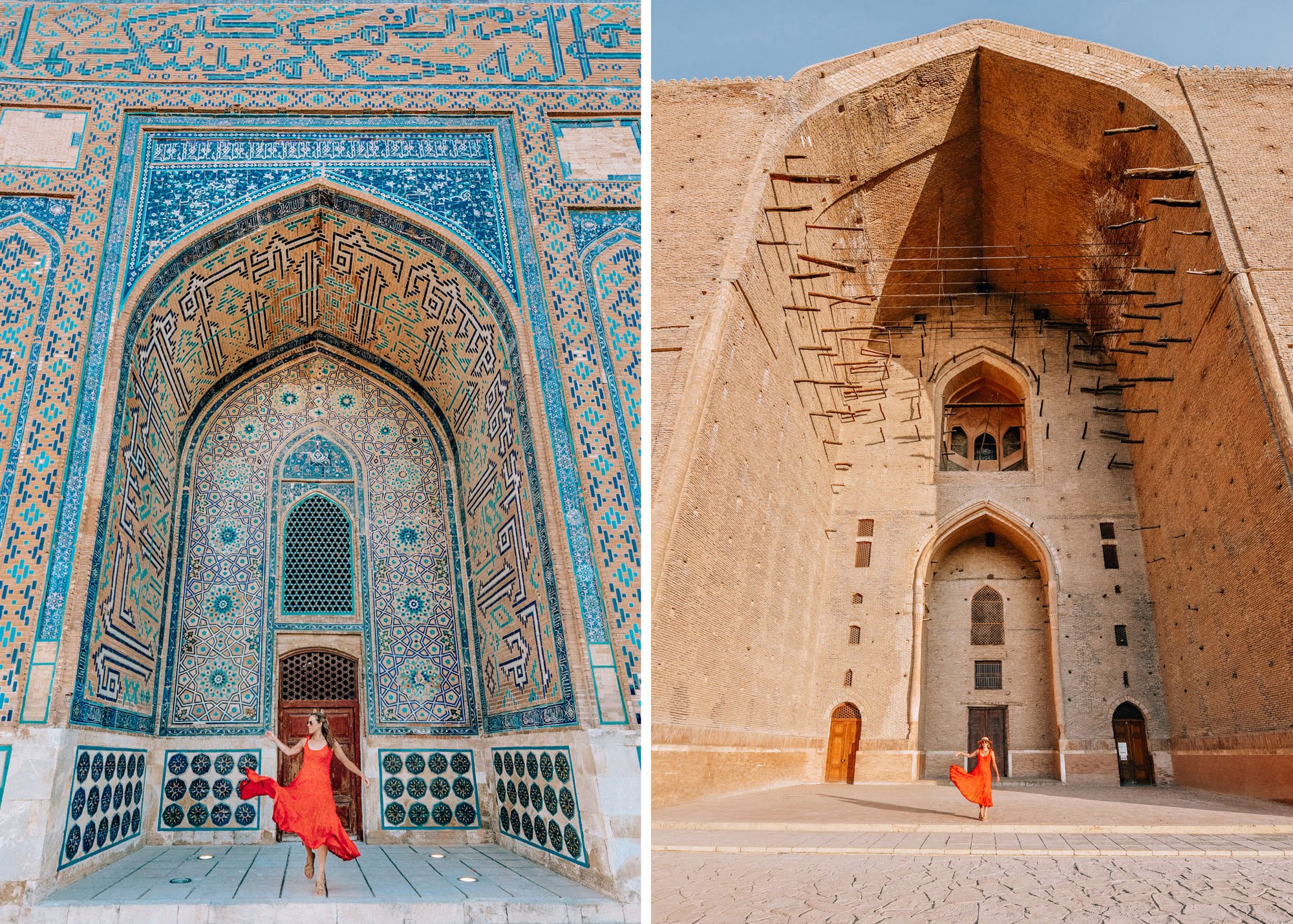 The Mausoleum of Khoja Ahmed Yasawi was commissioned in 1389 by Emir Timur, who ruled the area, to replace a smaller 12th-century mausoleum but when he died in 1405 it was never finished.

Even though we weren’t in Turkistan for long, we spent almost all of our time at the Mausoleum, seeing it at sunset, sunrise and then again at late morning when we also went inside. 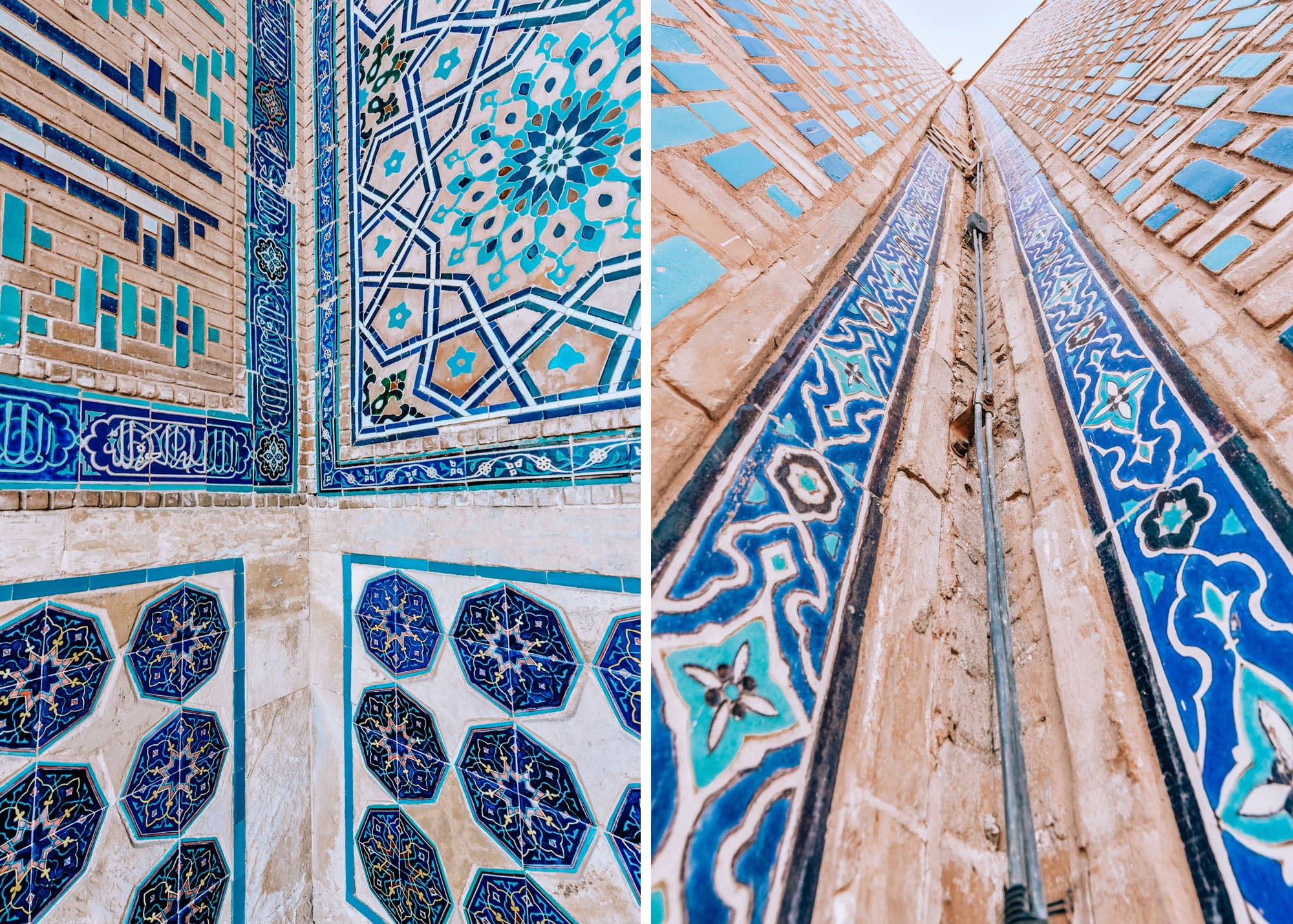 The tiles are so beautiful they really remind me of the architecture in Uzbekistan.

That afternoon we visited a Turkistan market. I thought it might be similar to Turkish markets but this one was much busier and chaotic! It was a feast of different colours and sounds, fruits and vegetables. 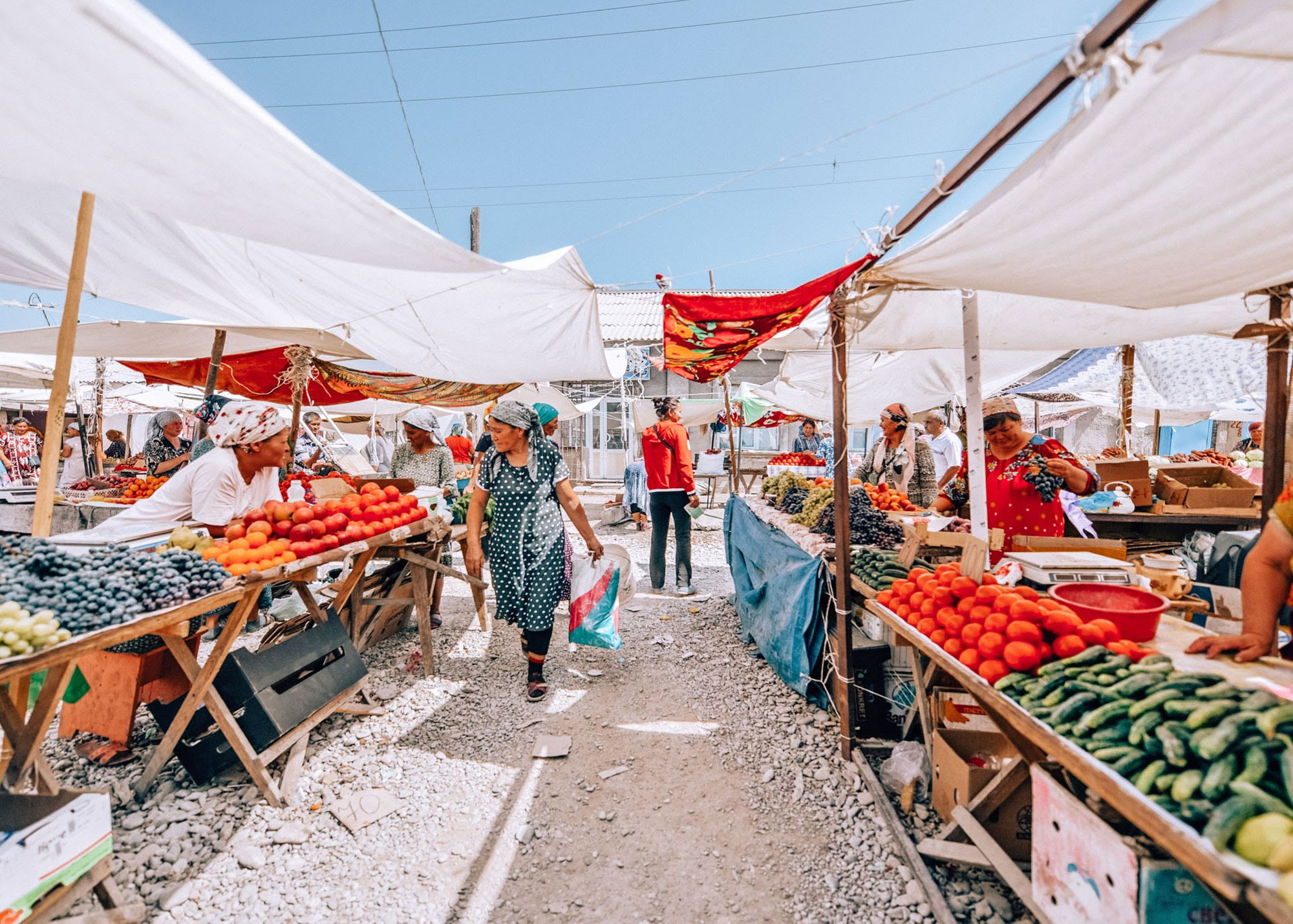 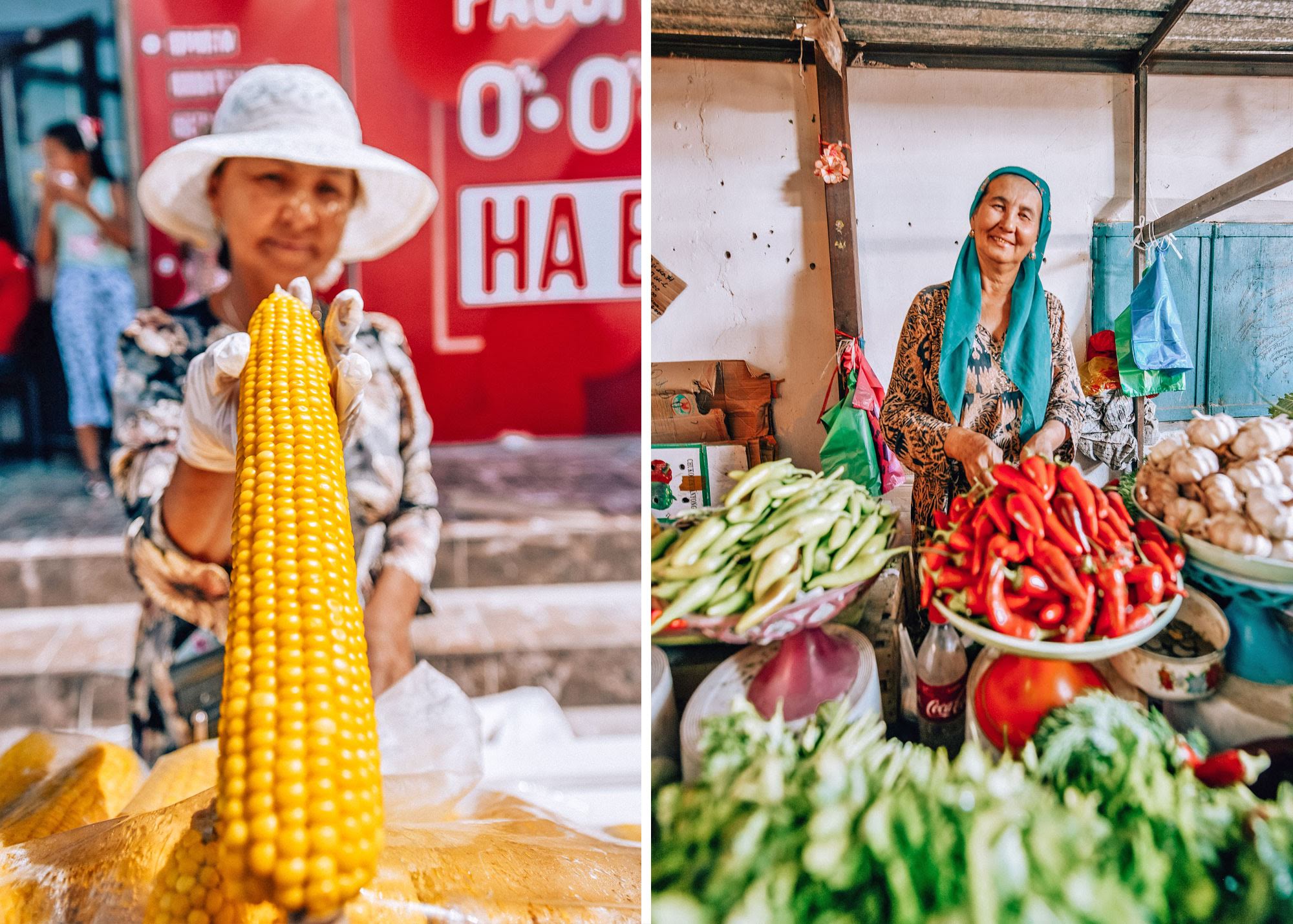 We drove back to the Rixos Hotel in Shymkent to have a press conference where journalists and other bloggers attended. It was a lot of fun meeting everyone and answering questions about our trip so far and the blogging world.

One of the main reasons we visited Kazahstan was to attend the Forum Open Kazakhstan event in Nur-Sultan (formally Astana) the capital of Kazakhstan so the next morning we flew from Shymkent to Nur-Sultan. I was excited as I had heard really cool things about this futuristic city and it didn’t disappoint. 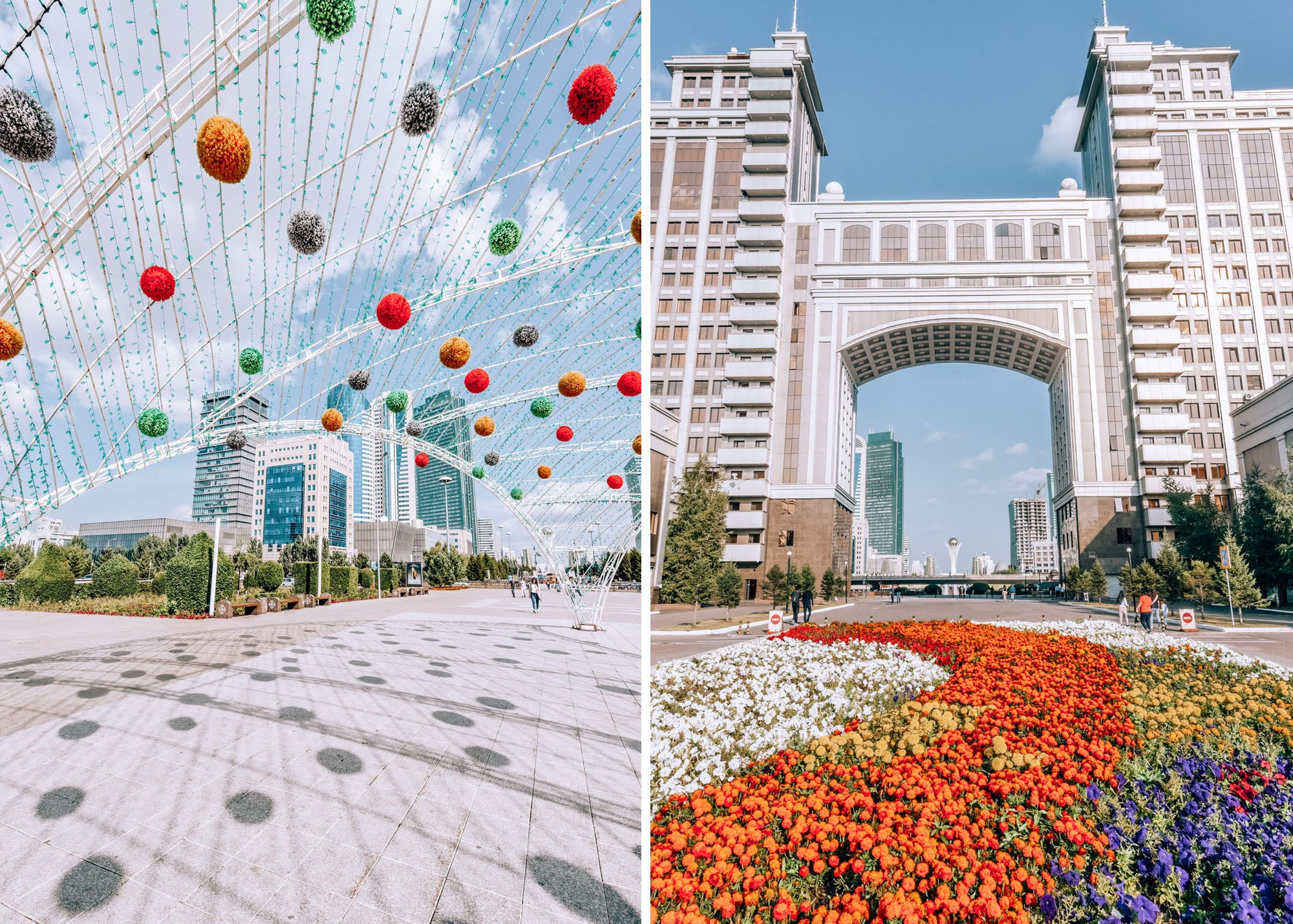 When we arrived we checked into the Rixos and then spent the afternoon mooching round the city getting our bearings before dinner that night where we met all of the other groups of content creators that had been exploring different regions of Kazakhstan. 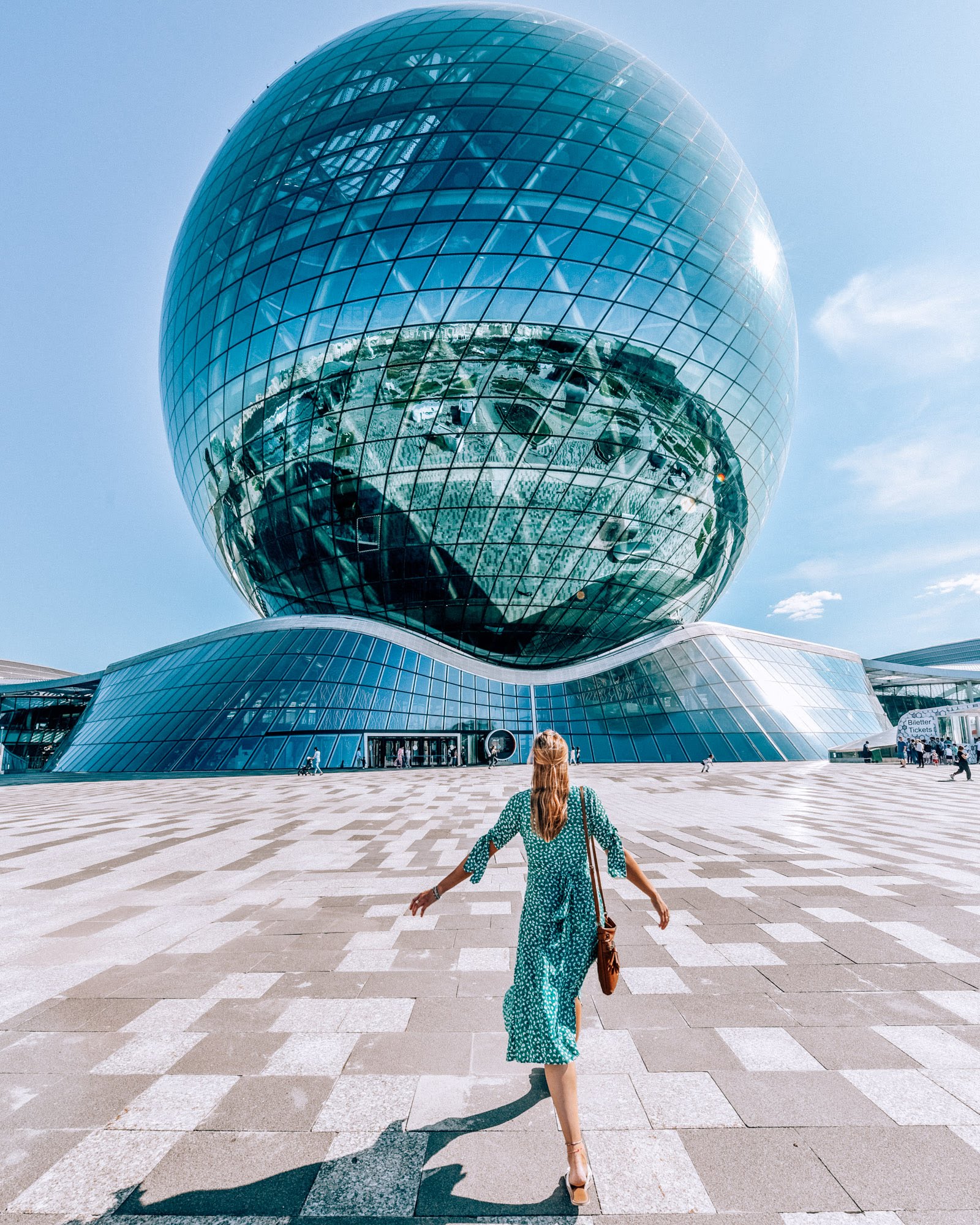 Over the next couple of days we visited 2 malls (the shopping is so good in Nur-Sultan!) a mosque and the Expo area as well as attending the event where Umit and I were speakers on a panel. 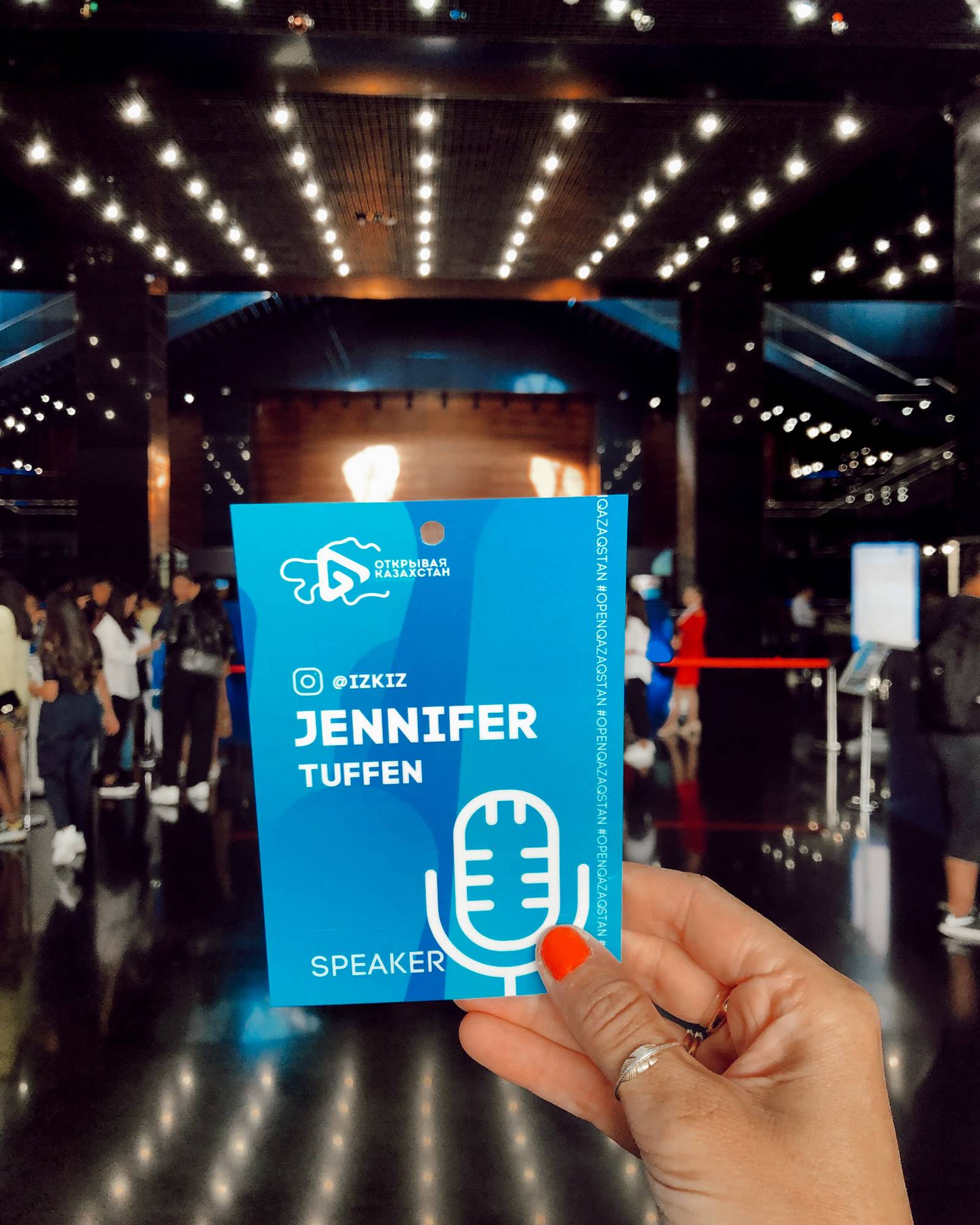 We had such a great trip. The Kazakh people were so friendly and welcoming, we tried delicious food such as manti and chak chak (and not so delicious things such as horse milk!) we hiked, we shopped, we laughed, we danced, we drank and we cried when we had to leave our awesome group who became like family after 9 days.

Thanks for the memories Kazakhstan!

To see a short summary, check out my video: