On the 23rd of October we packed our bags and flew to Saudi Arabia. We landed at Riyadh at 1 in the morning and went to stay at the Marriott Airport Hotel for a few hours before heading back to the airport to get another flight to Al Ula.

Saudi Arabia is somewhere I never thought I would visit. Even though i’ve spent quite a lot of time in the Middle East (Jordan, Bahrain, Dubai, Abu Dhabi…) when I received the invitation to visit the KSA I ummed and ahhed over it for quite sometime.  I had no real idea of what to expect but I have been trying to step out of my comfort zone and say yes to new experiences so I accepted the invite and i’m really glad I did. The Saudi people welcomed us with open arms, we explored amazing landscapes and historical places that aren’t even open to the public until 2020, ate lunch at Princess Noura Aladel’s farm, stayed at a desert camp, watched the sunrise at a rock shaped like an elephant and went to the “edge of the world”.

The trip was in collaboration with the Saudi Arabia Tourist Board. We spent a week exploring the area of Al Ula before heading to Riyadh to attend the gala to celebrate Saudi Arabia opening it’s heart and doors to the world. Tourists can now apply for a visa to visit the Kingdom which up until now has been pretty difficult to enter without a special invitation. 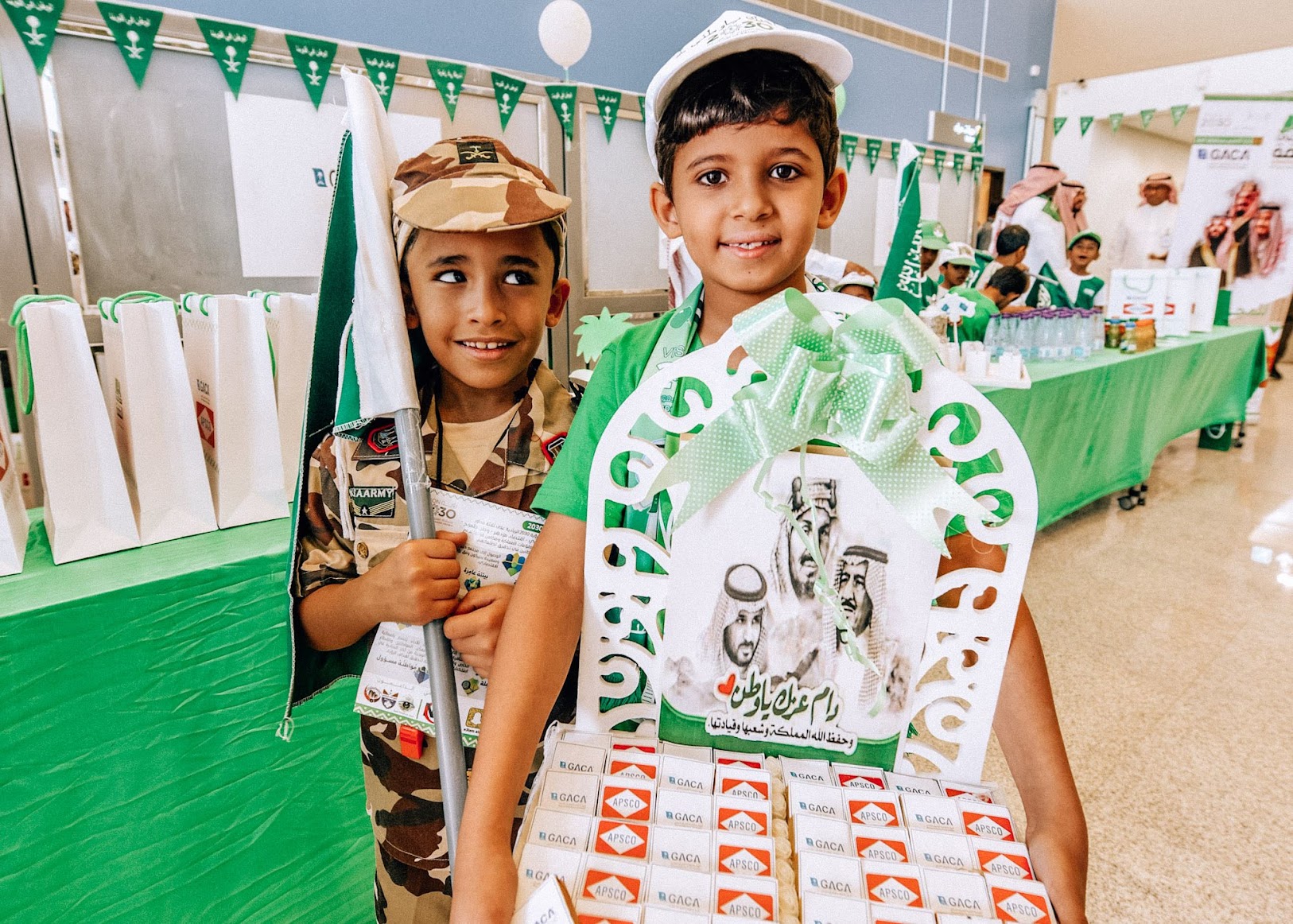 After a 1 and a half hour flight from Riyadh we landed in Al Ula and were greeted by the cutest kids waving flags and offering us sweets. Al Ula area is located in the Northwestern part of Saudi Arabia and it’s packed with historical sites and landmarks. Al Ula was historically located on the incense route, the network of paths that facilitated the trading of spices, silk and other luxury items through Arabia, Egypt and India. 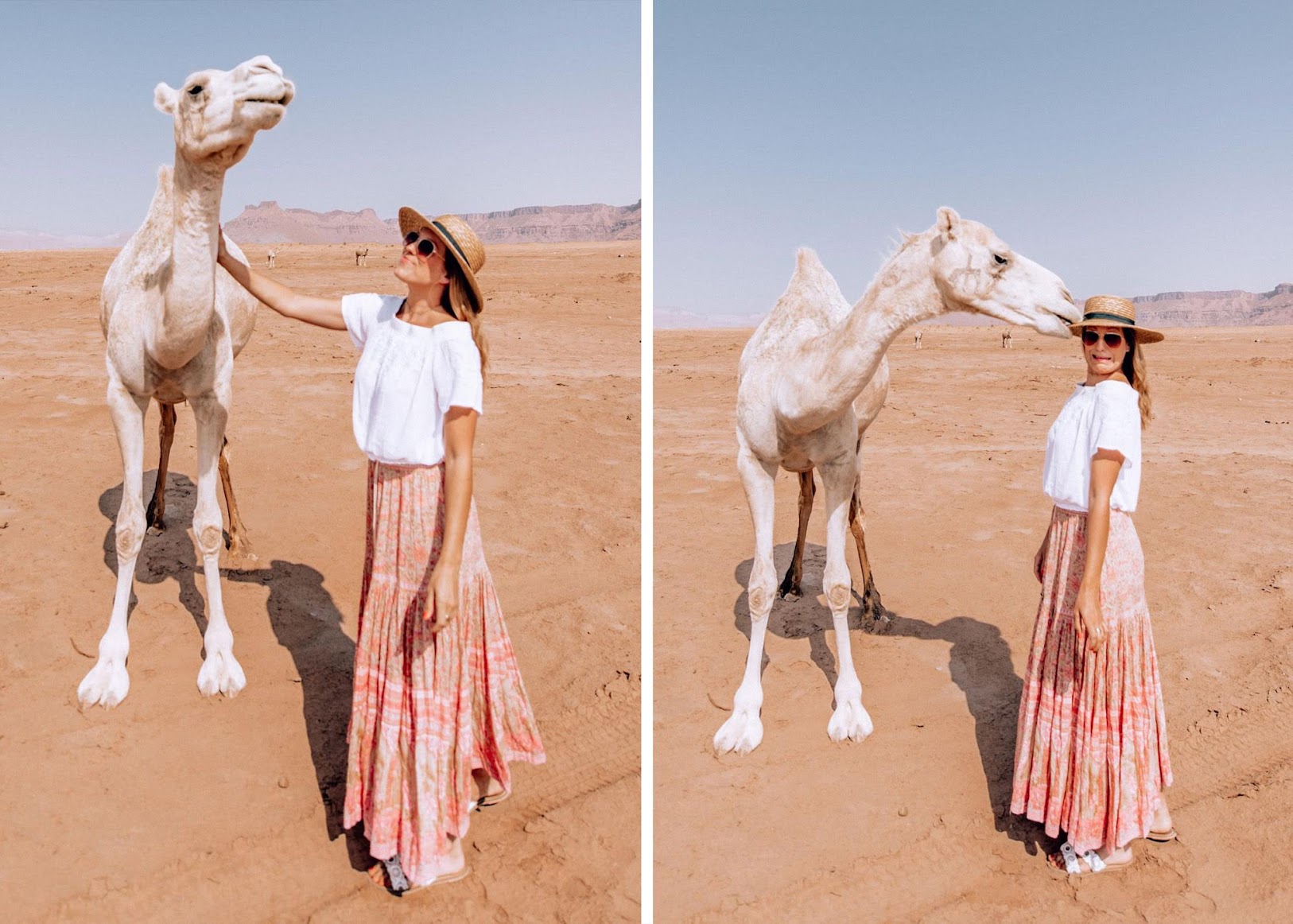 We jumped in a convoy of jeeps and drove through the desert to to Sahary Elolaa Resort which was our home for the next few days. It really reminded me of the camp I  stayed in when we were in Wadi Rum in Jordan.

We had a few hours to rest before we met our guide and headed for a traditional lunch and then to Madain Saleh. 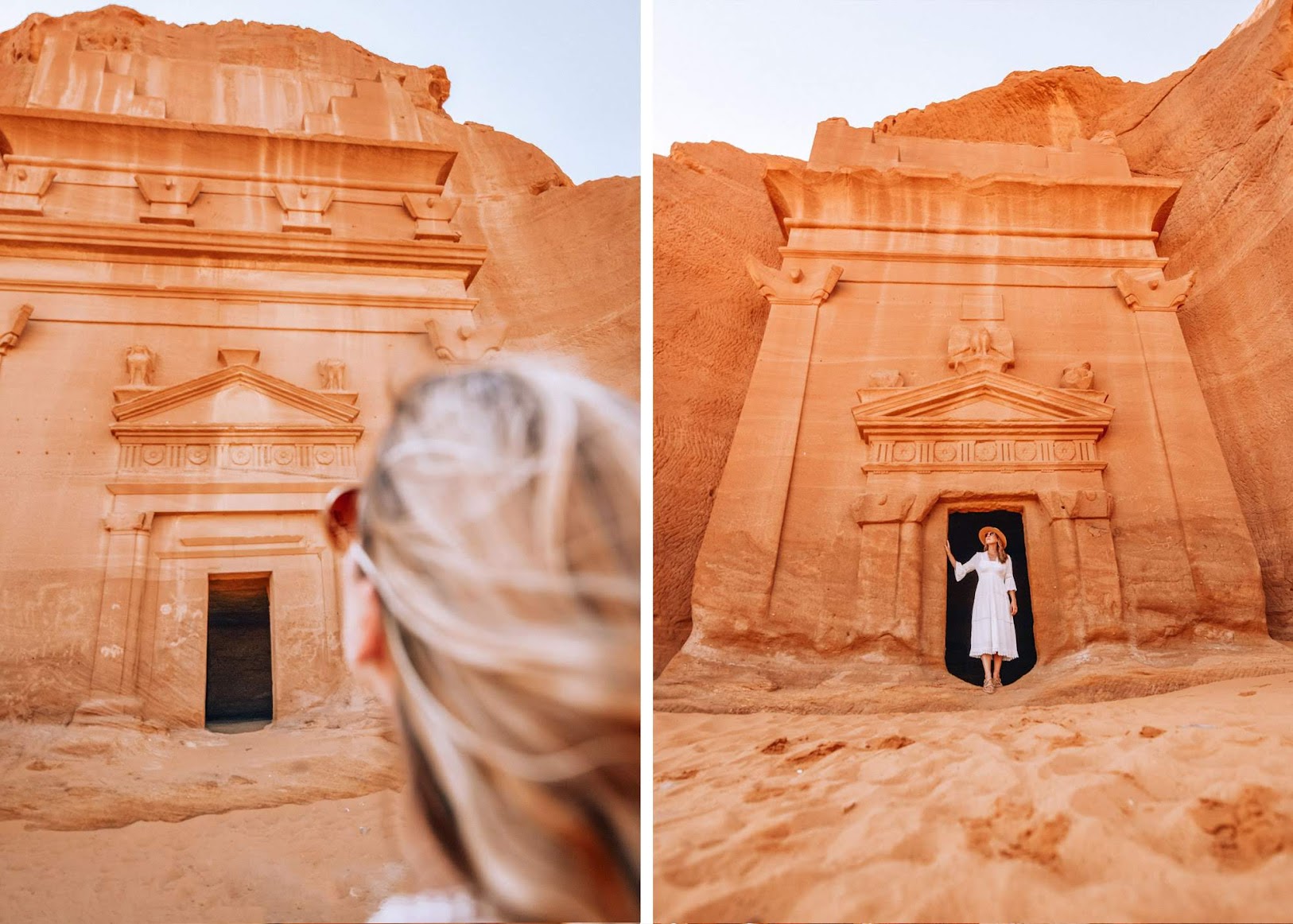 Madain Saleh is also known as Al-Hijr or Hegra by the Nabatean people who carved it’s magnificent tombs into the golden rocks. It was the second largest city of the Nabataeans and it was the first Saudi site listed by UNESCO as a World Heritage site for it’s huge historical significance.

When I posted a series of photos on Instagram and asked my followers to guess where I was, 99% of them answered with “Petra, Jordan” so it should come as little surprise to learn that they are linked. While Petra was the capital of the Nabatean Kingdom, Madain Saleh was their second city, explaining why the unusual carved rock architecture is so similar. 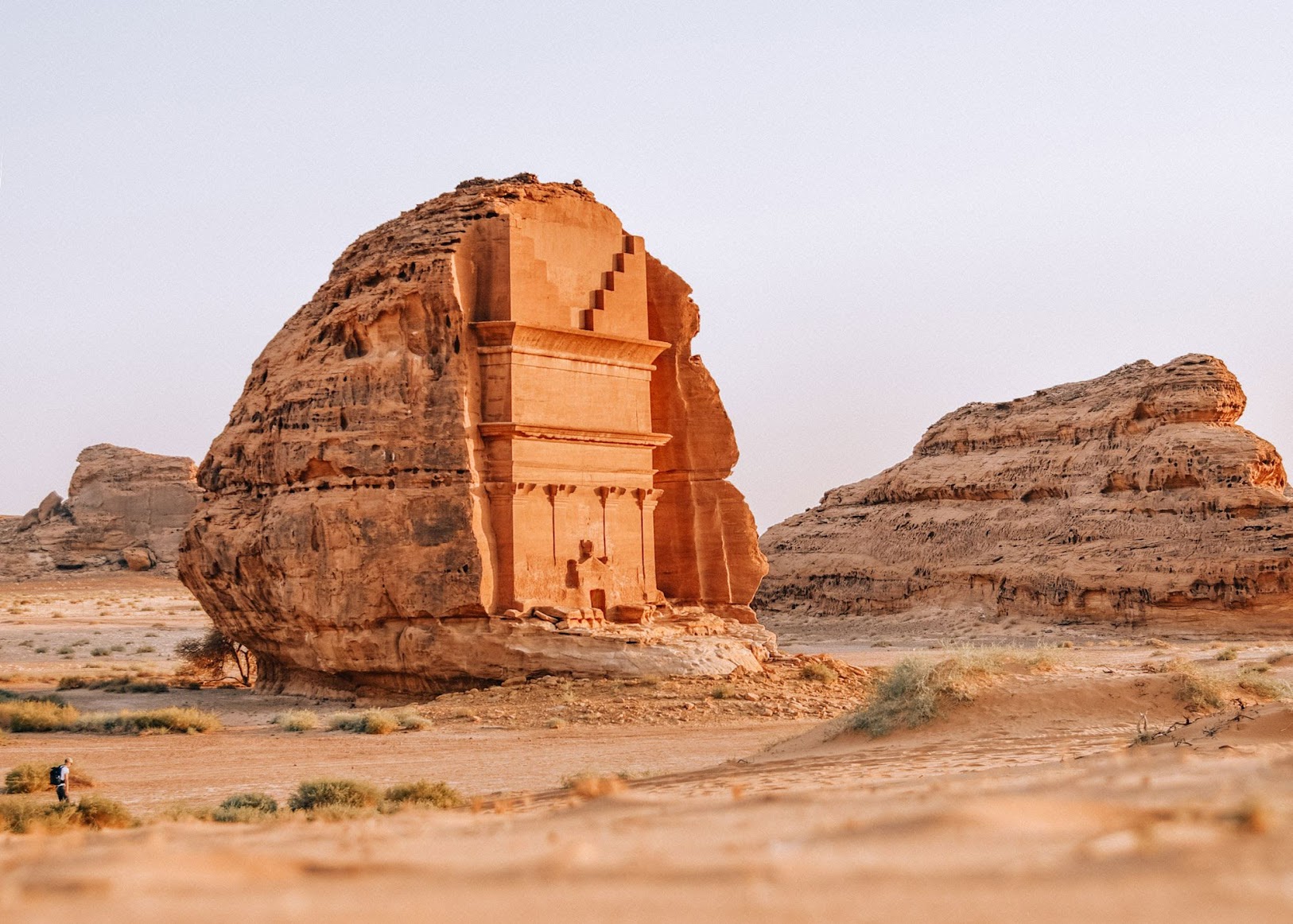 Al Ula old town was once a bustling civilisation. These 800 tightly packed mud-brick houses, parts of which are more than 2,000 years old, are now abandoned ruins, decaying in the hot desert sun. 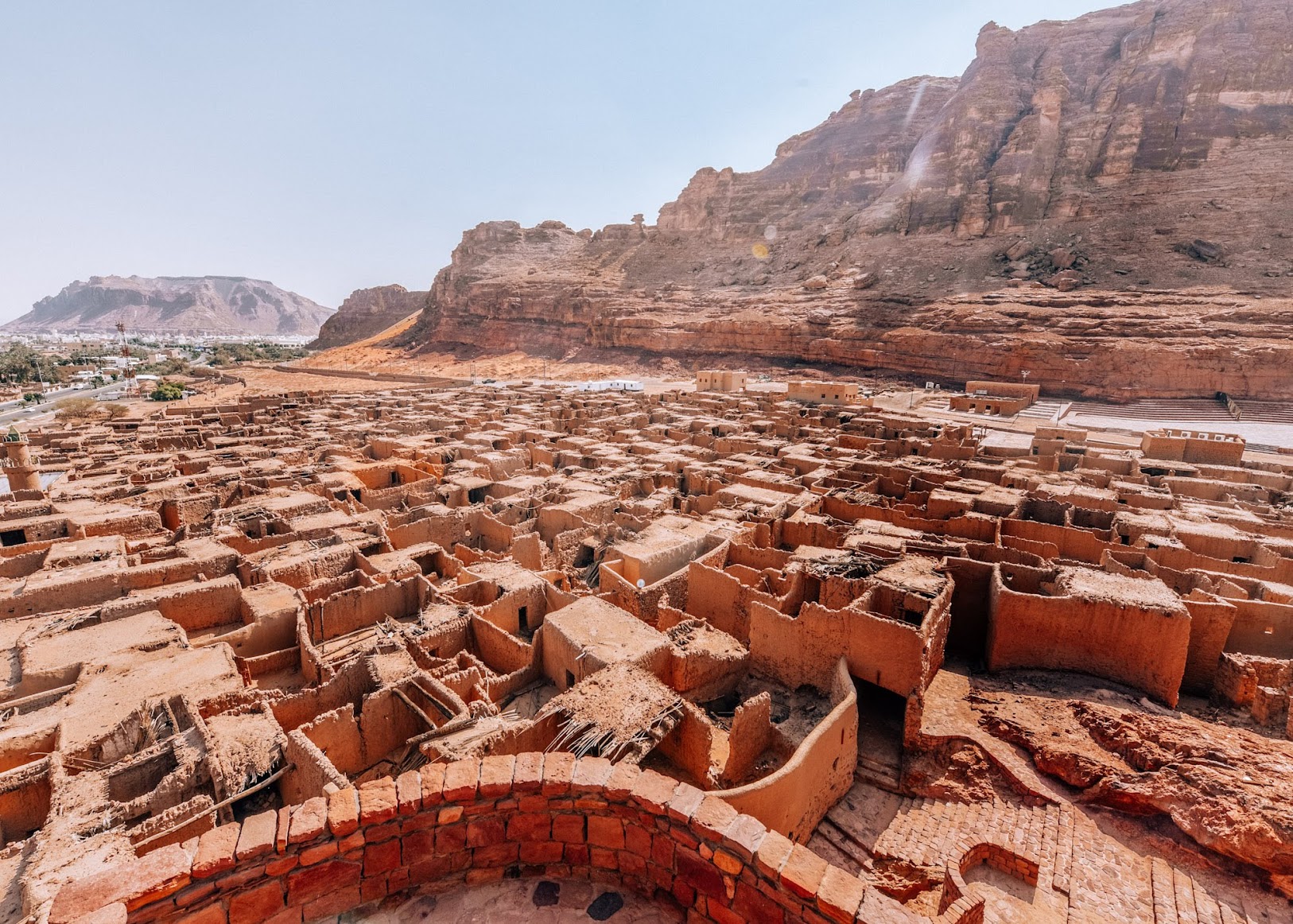 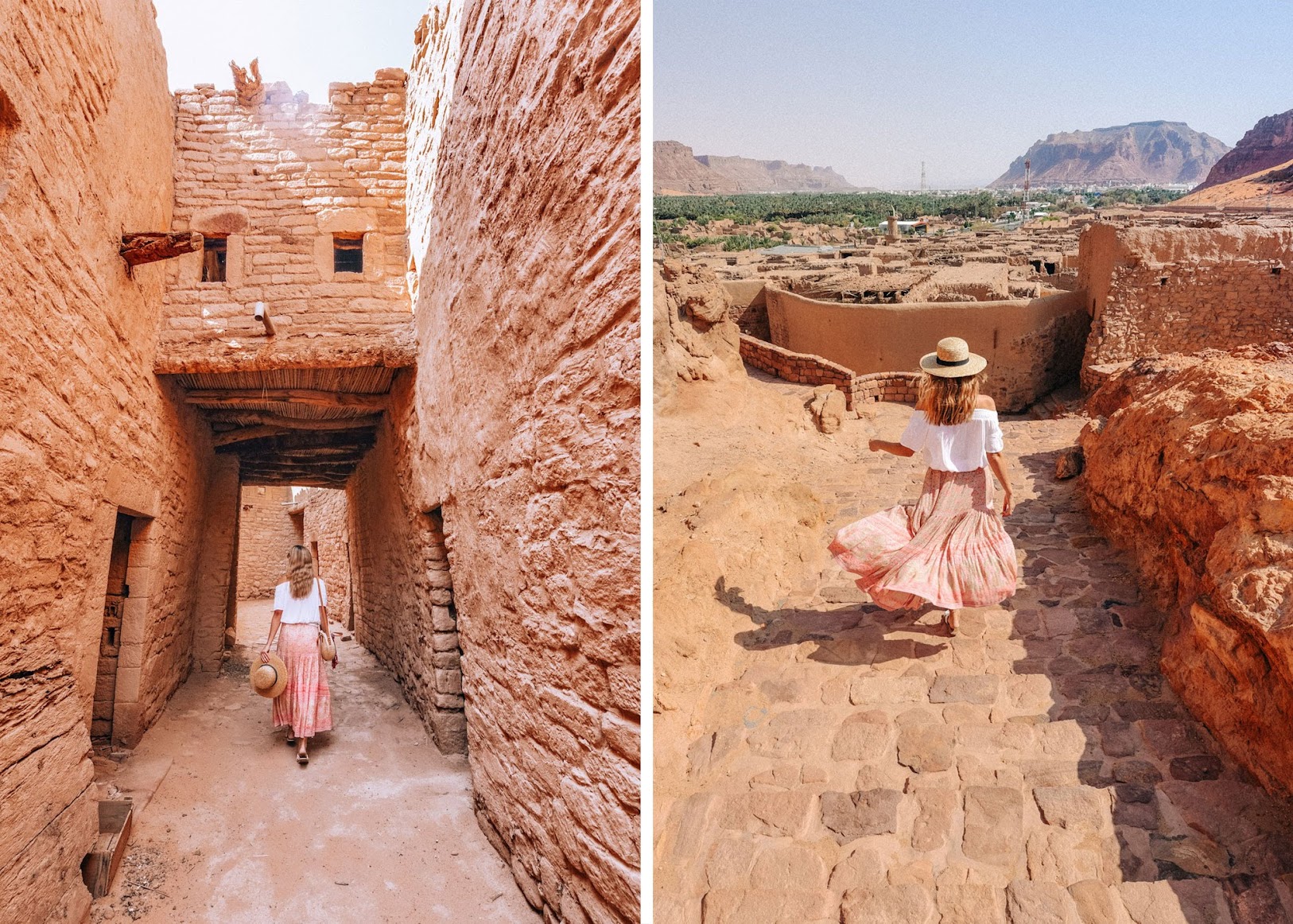 We explored the old town, walking through the narrow corridors which was like traversing a maze, with ancient history at each turn.

On our second morning we woke up at 5am to watch the sunrise at Elephant Rock which was one of the highlights of the trip for me. It was a peaceful moment as the sun started to peek through the rock lighting up the desert with a golden glow. 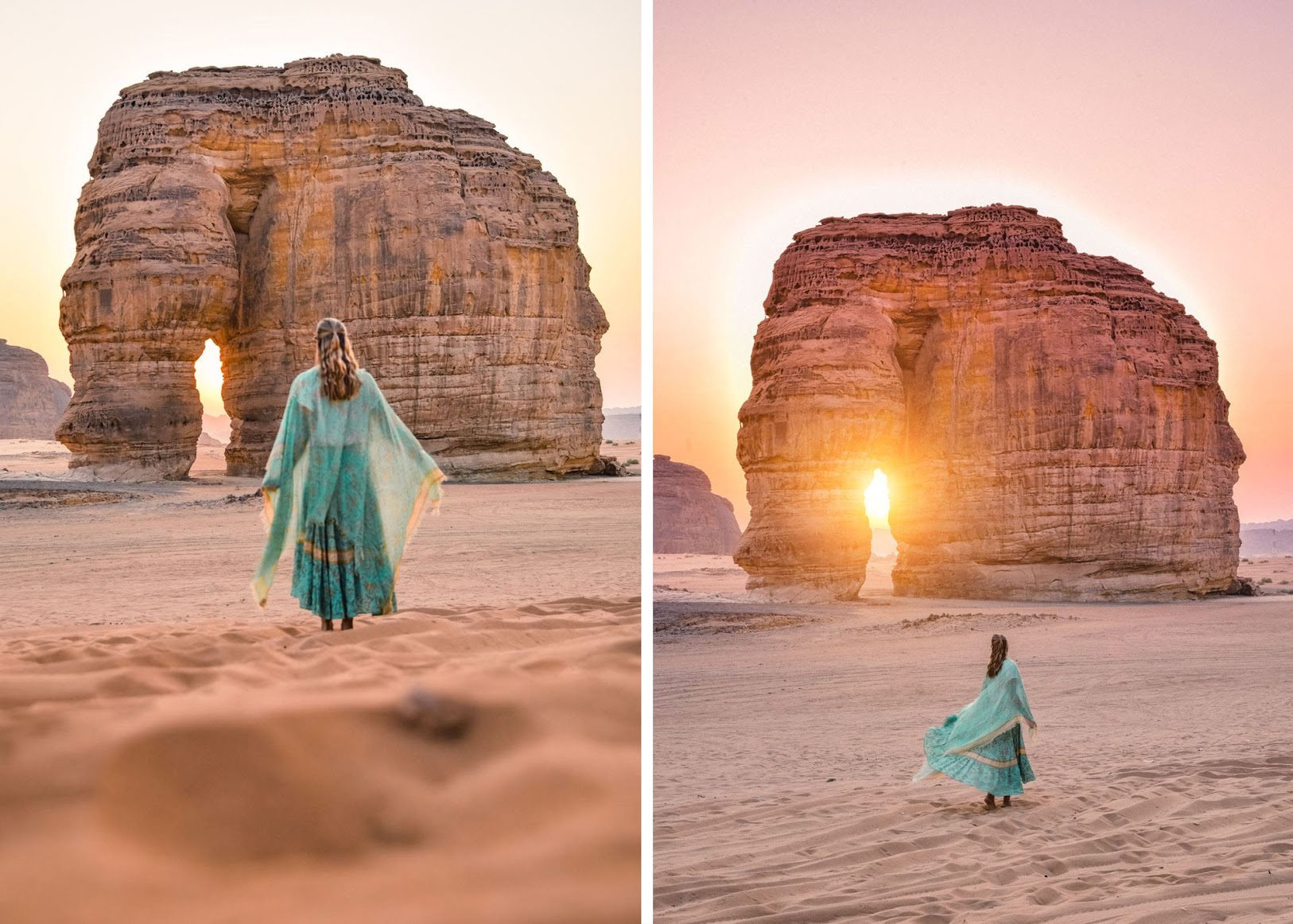 On our last day we had lunch at Princess Noura Aladel’s farm which was such a unique experience. The food was so delicious and the Princess was lovely. We got to explore the land, drink Arabic coffee with the Prince and eat the most delicious dates i’ve ever had. 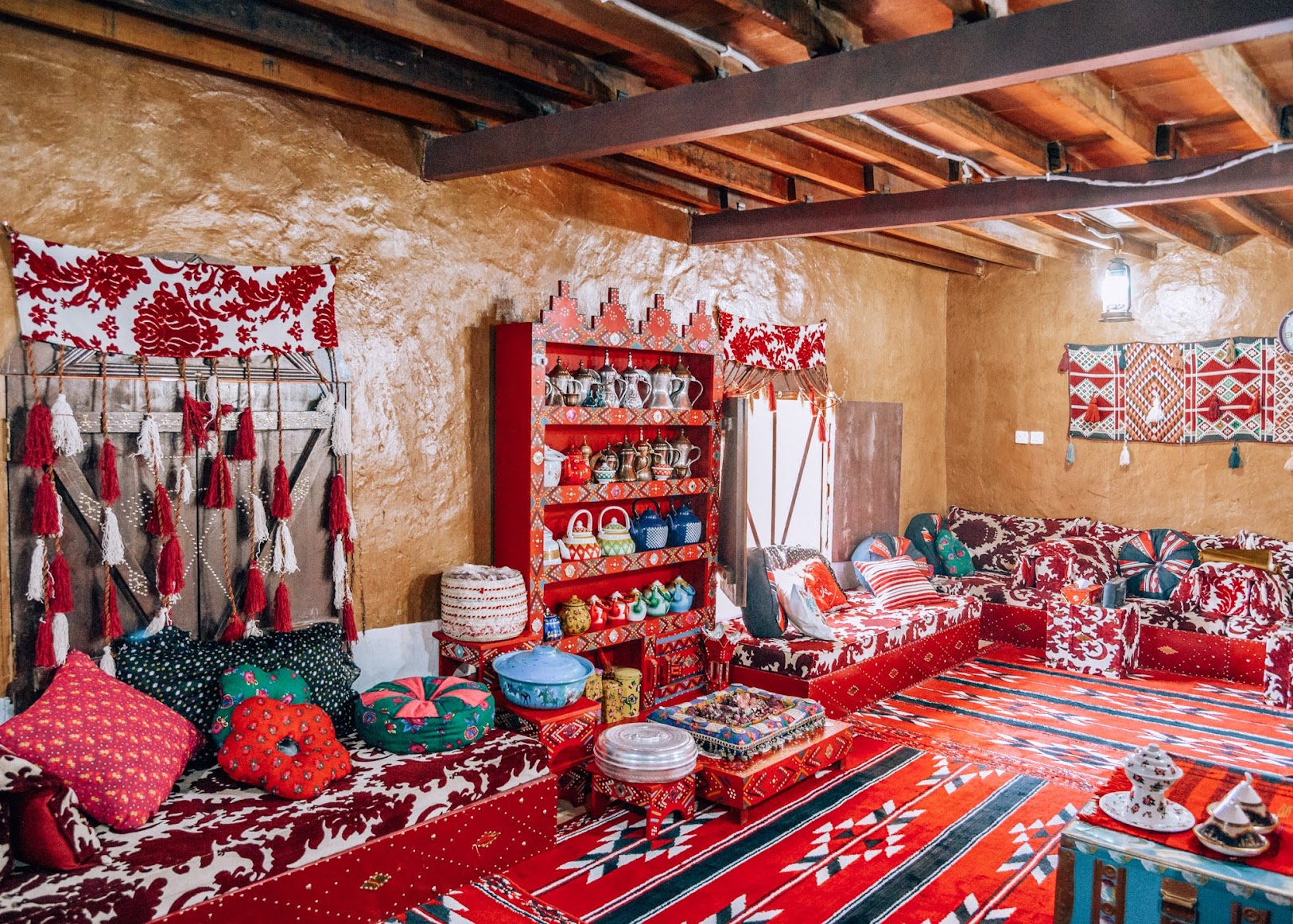 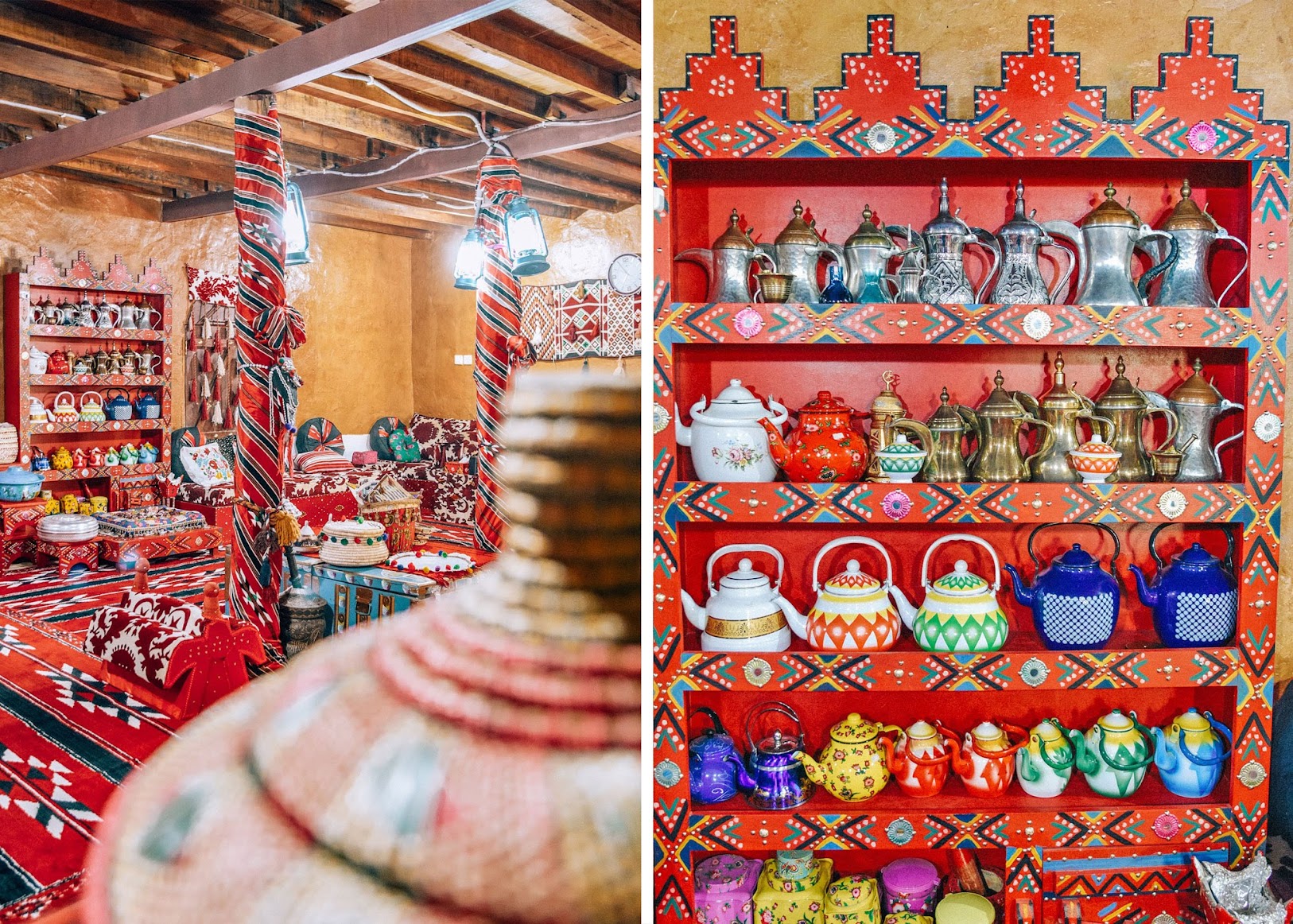 Before we knew it, it was time to fly back to Riyadh to attend the gala. We stayed at the gorgeous Ritz Carlton and spent the next day before the gala exploring the Edge of the World which is located 96km northwest of Riyadh.  You stand on the edge of a sheer precipice, stare out across the dry, barren valley floor and feel like you’re actually at the edge of the world. 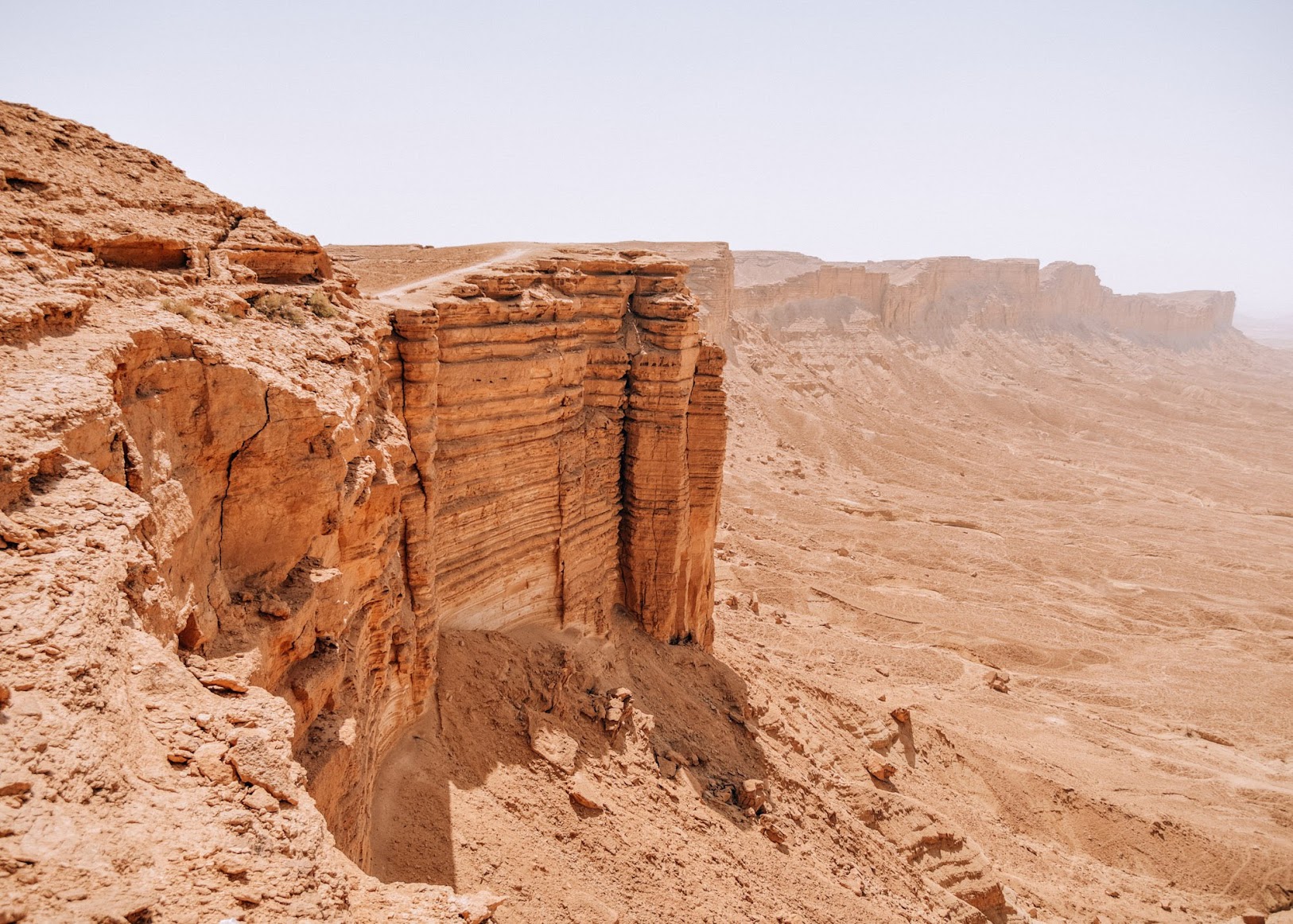 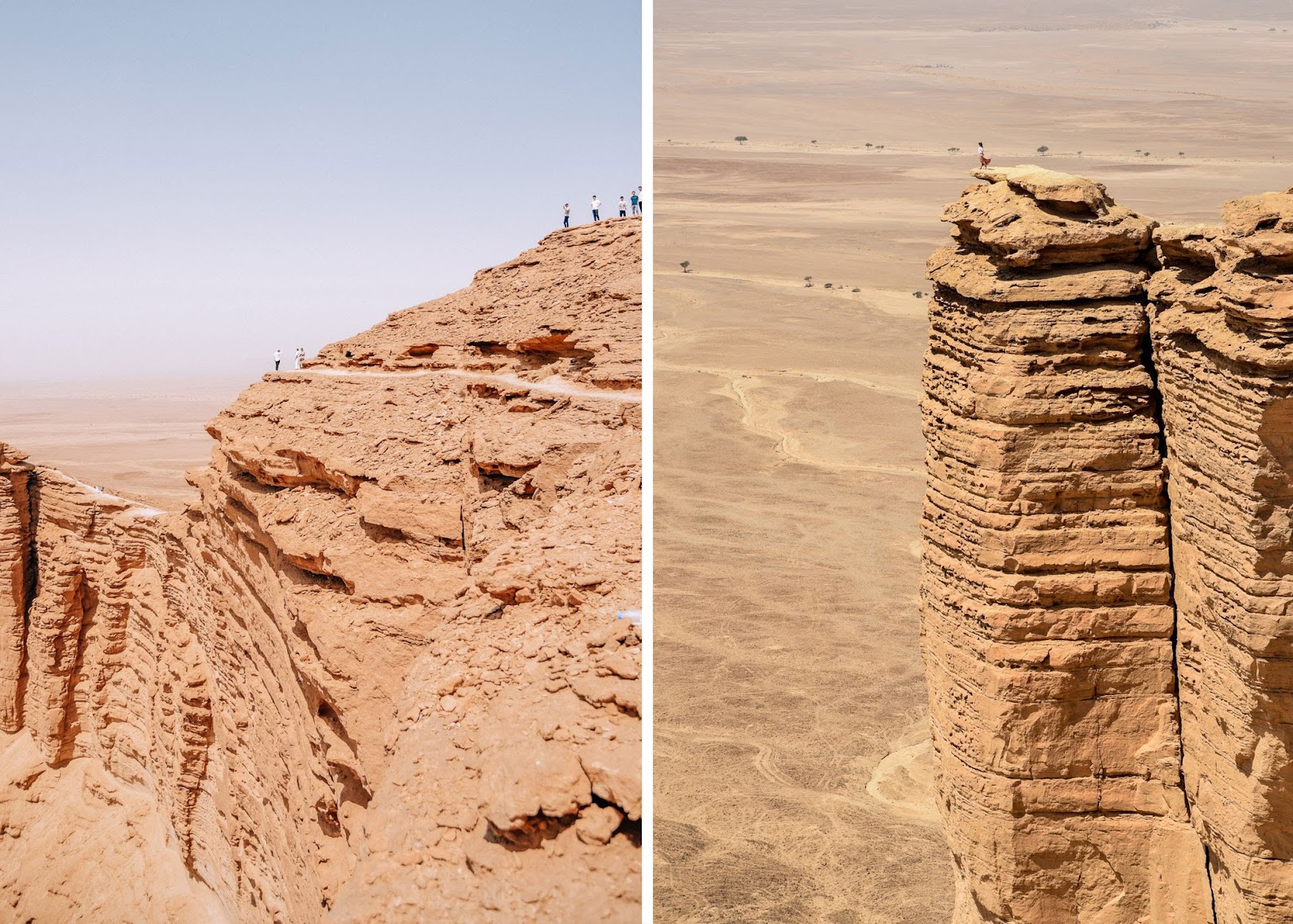 On the way back to the city we stopped off at a cave full of bats and had a traditional lunch of lamb and rice which we ate cross legged on the floor.

That night we attended the gala which was hosted by the Saudi Commission for Tourism and Heritage at Al Diriyah in Riyadh. It was such a fun and interactive event to mark Saudi Arabia opening up to tourism and it was amazing to take part in such a historic moment. 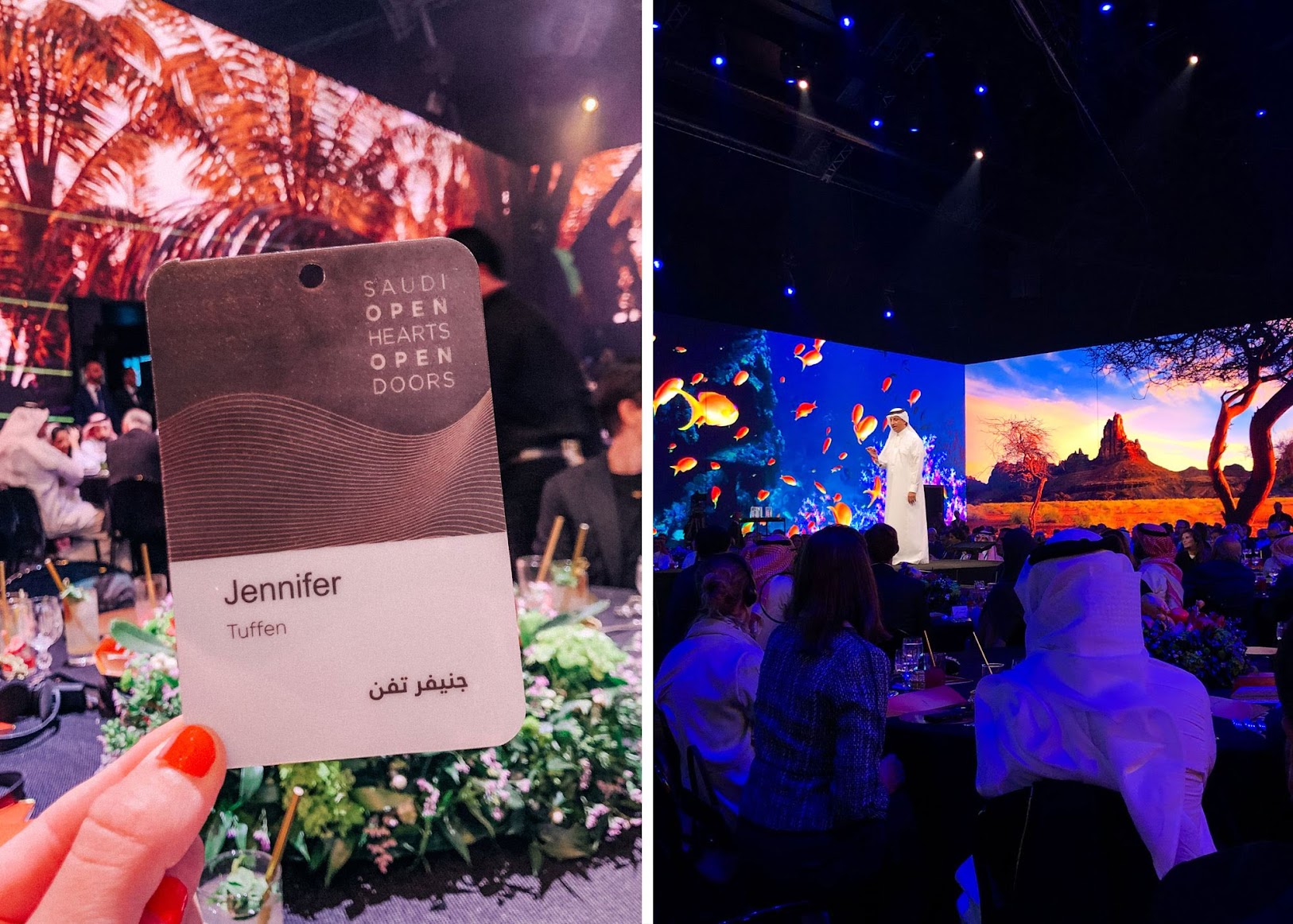 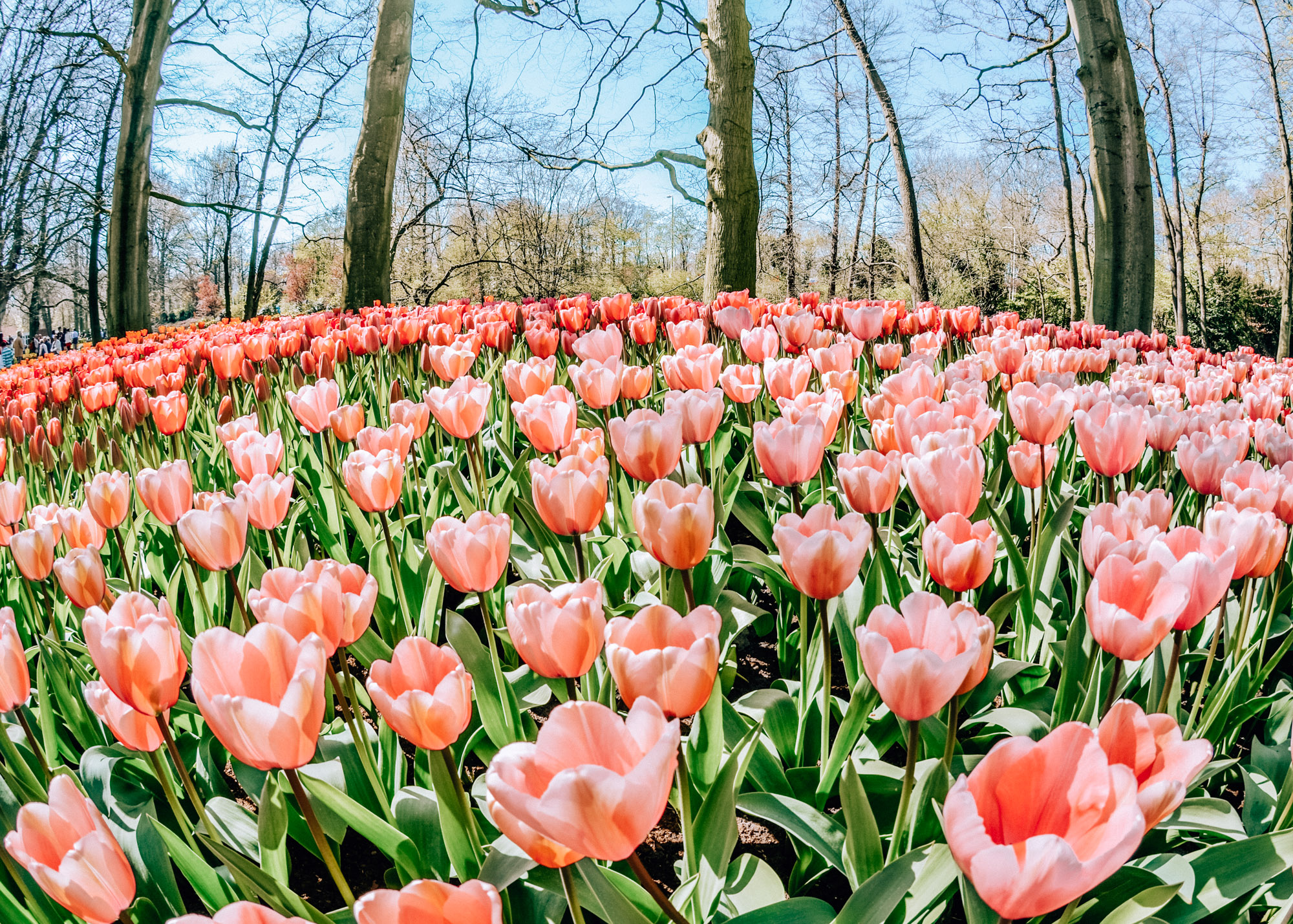 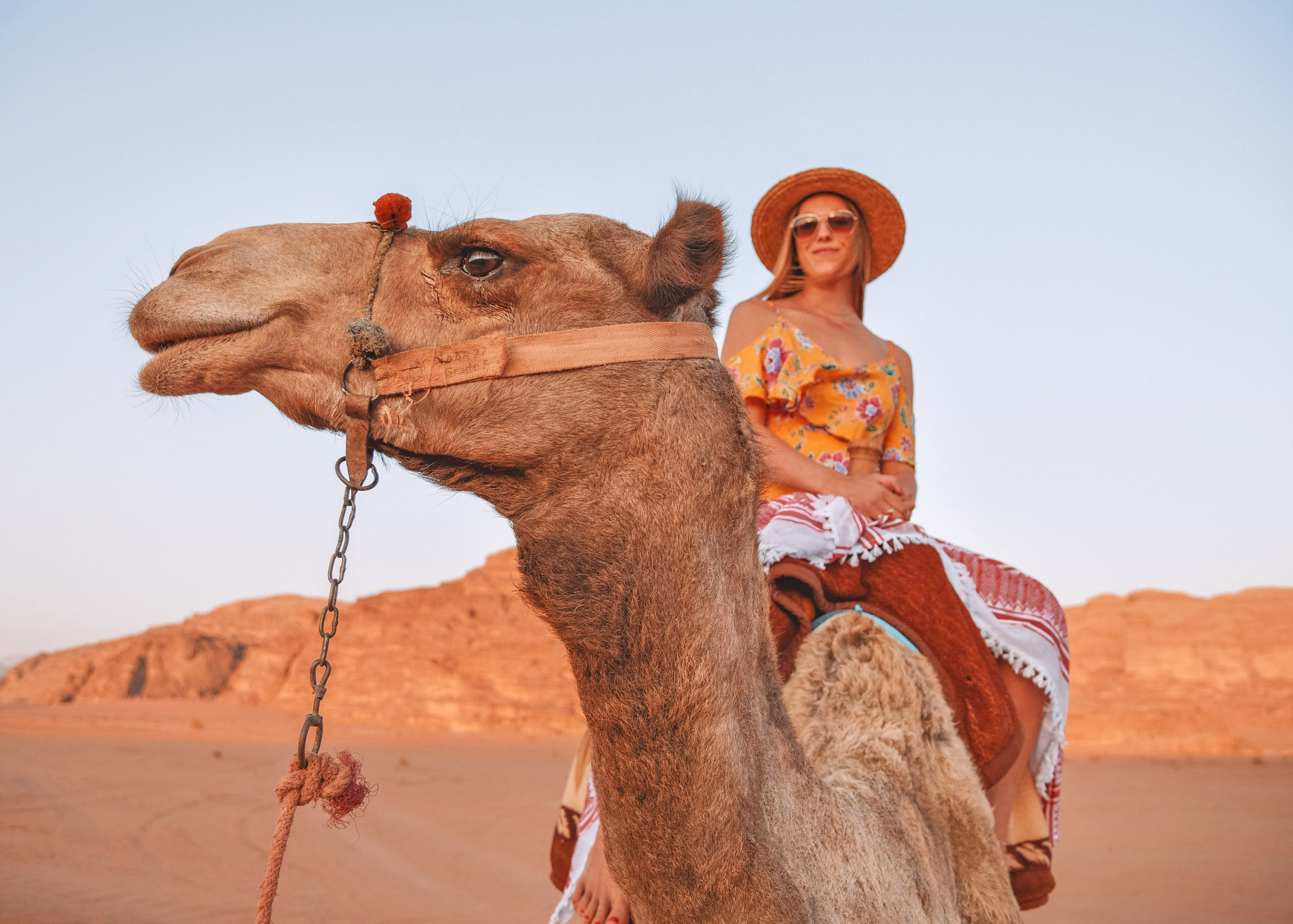 Jordan with PADI and Aqaba Tourism

A weekend in Faralya