We recently went on a 3 day visa free cruise around Greece with Tatil Sepeti.  We set sail from  Kusadasi, a bustling resort on the Aegean coast of Turkey which is famous for it’s close proximity to Ephesus and the House of Virgin Mary. We visited 5 Greek islands over the course of 3 days: Patmos, Crete, Santorini, Athens and Mykonos before sailing back to Kusadasi. 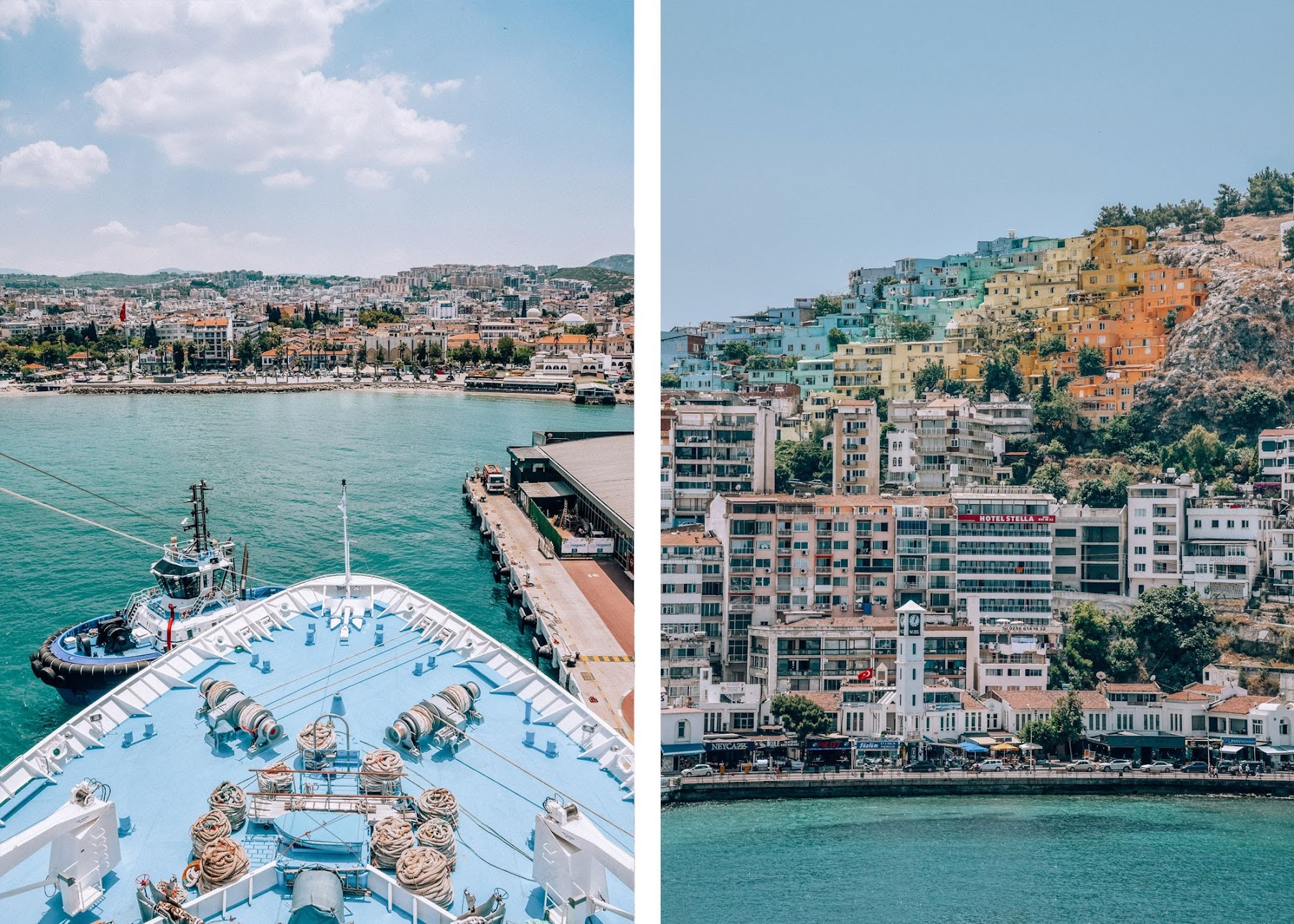 CELESTYAL OLYMPIA
Our ship/home for the 3 days was called the Celestyal Olympia. With restaurants, a casino, spa, gym, basketball area,  games room, duty free shops, 2 swimming pools on the roof deck and many different bars to choose from; Horizon Lounge Bar, Thalassa bar, Helios Bar, Eclipse Lounge bar, Muses bar, Argo lounge bar and Selene (my personal favourite) it was bigger than I was expecting.

We were on the All-Inclusive packet and alcohol and soft drinks were included in this. There was a buffet in the restaurant for breakfast, lunch and dinner and also a snackbar to eat on the rooftop area which sometimes had a BBQ in the evening. 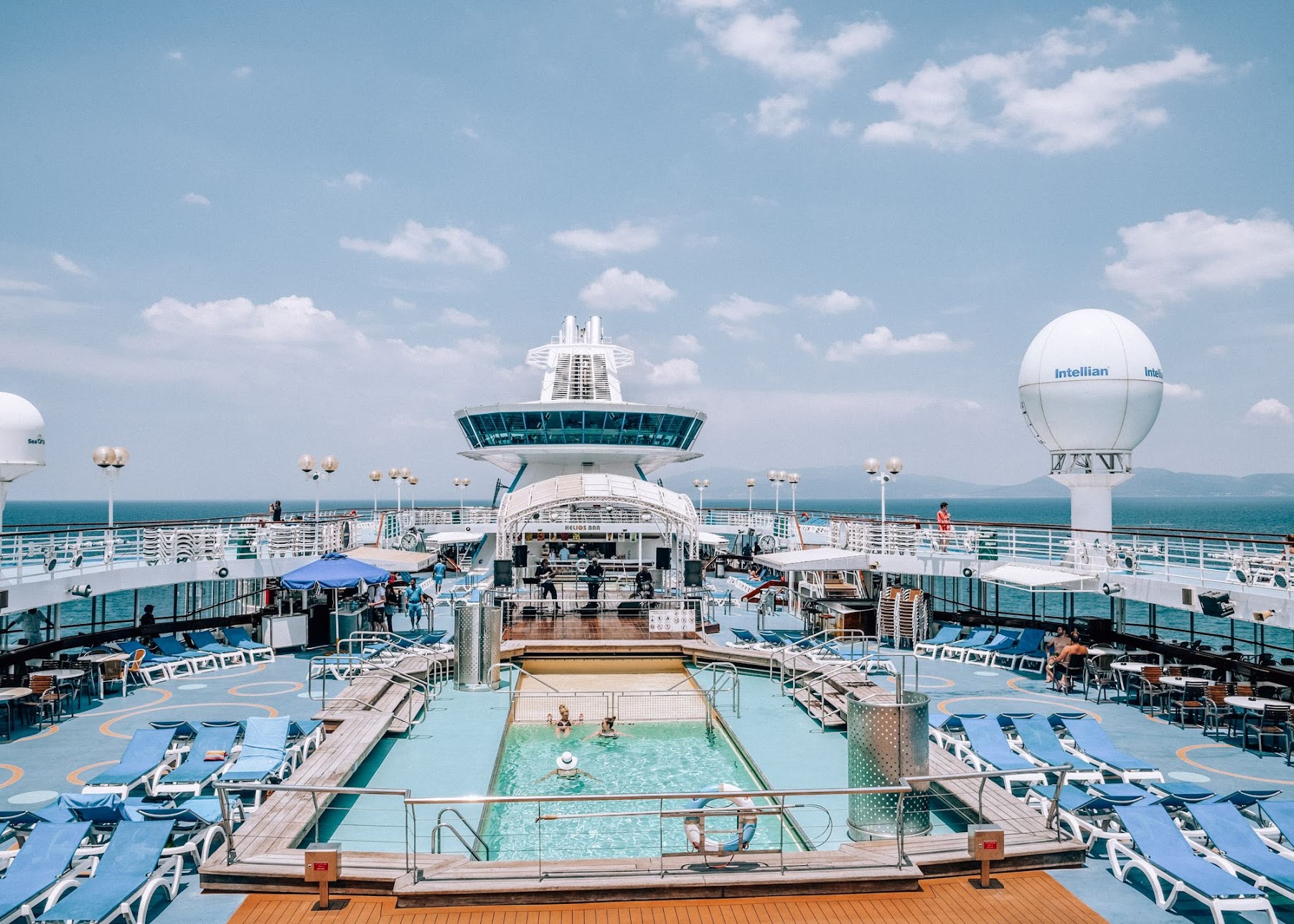 Our cabin number was 6076 and it had 2 single beds, a desk area, a wardrobe and a small bathroom with a toilet and shower (hairdryer included, thought I would add that as I was searching for that information before i went and couldn’t find it) It was really cozy and a very interesting experience to wake up in a new destination every day, with a different view out of the window each morning. Throughout the day, staff would come in and clean our room and there was a turndown service each night where they would leave a little snack on your pillow which was a nice touch. 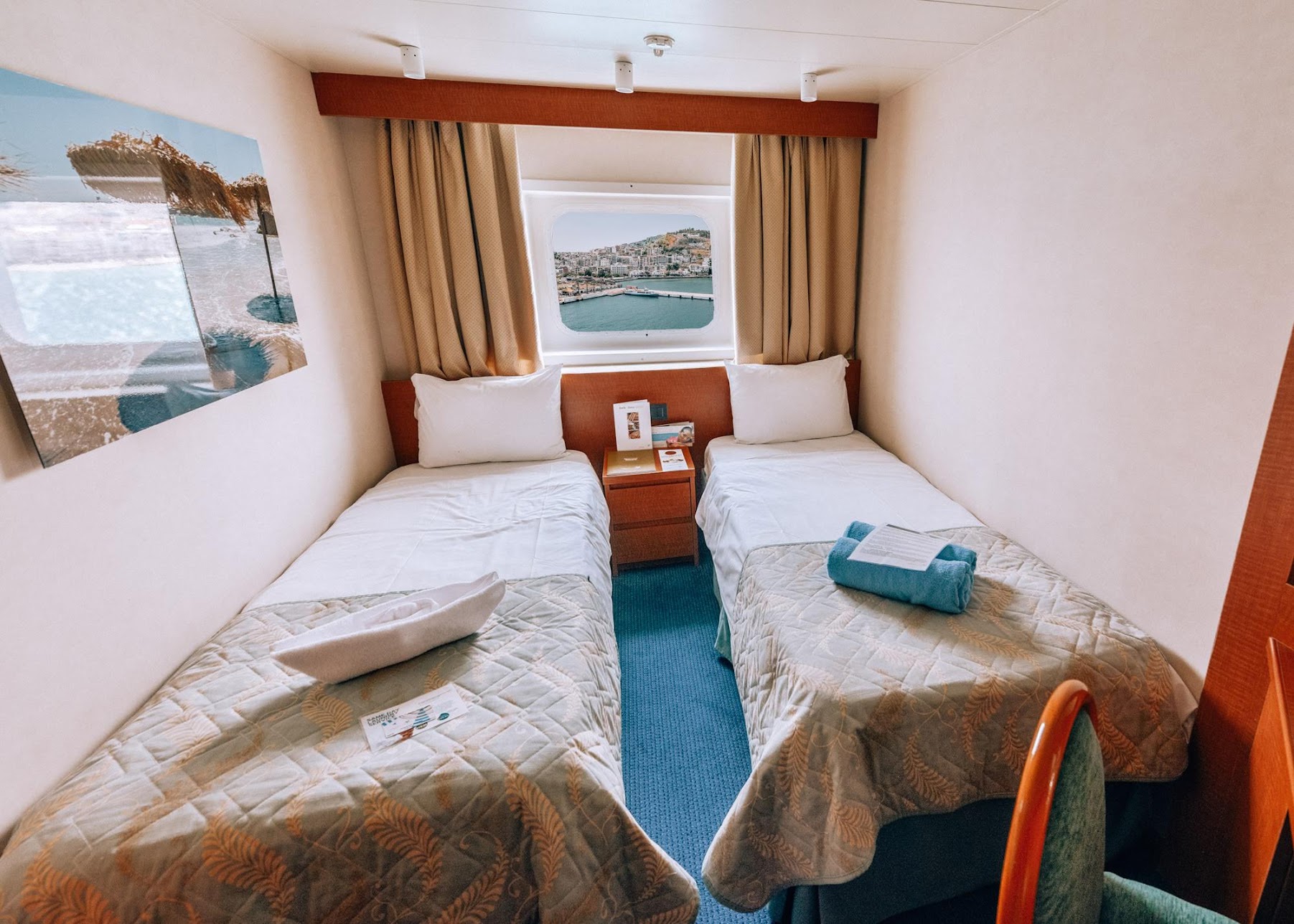 This trip is ideal for Turkish people as they would normally need to apply for a visa to visit Greece but as this is a visa free tour, they don’t have to worry about that and they can just sit back and enjoy being on a floating hotel that takes you from one gorgeous Greek island to the next.

PATMOS
Our first island was Patmos. I’ve been to a few islands in Greece but this was my first time to Patmos. It’s a tiny island with an area of only 34 sq. kilometres but it was lovely with a cute town area and narrow bougainvillea lined streets. 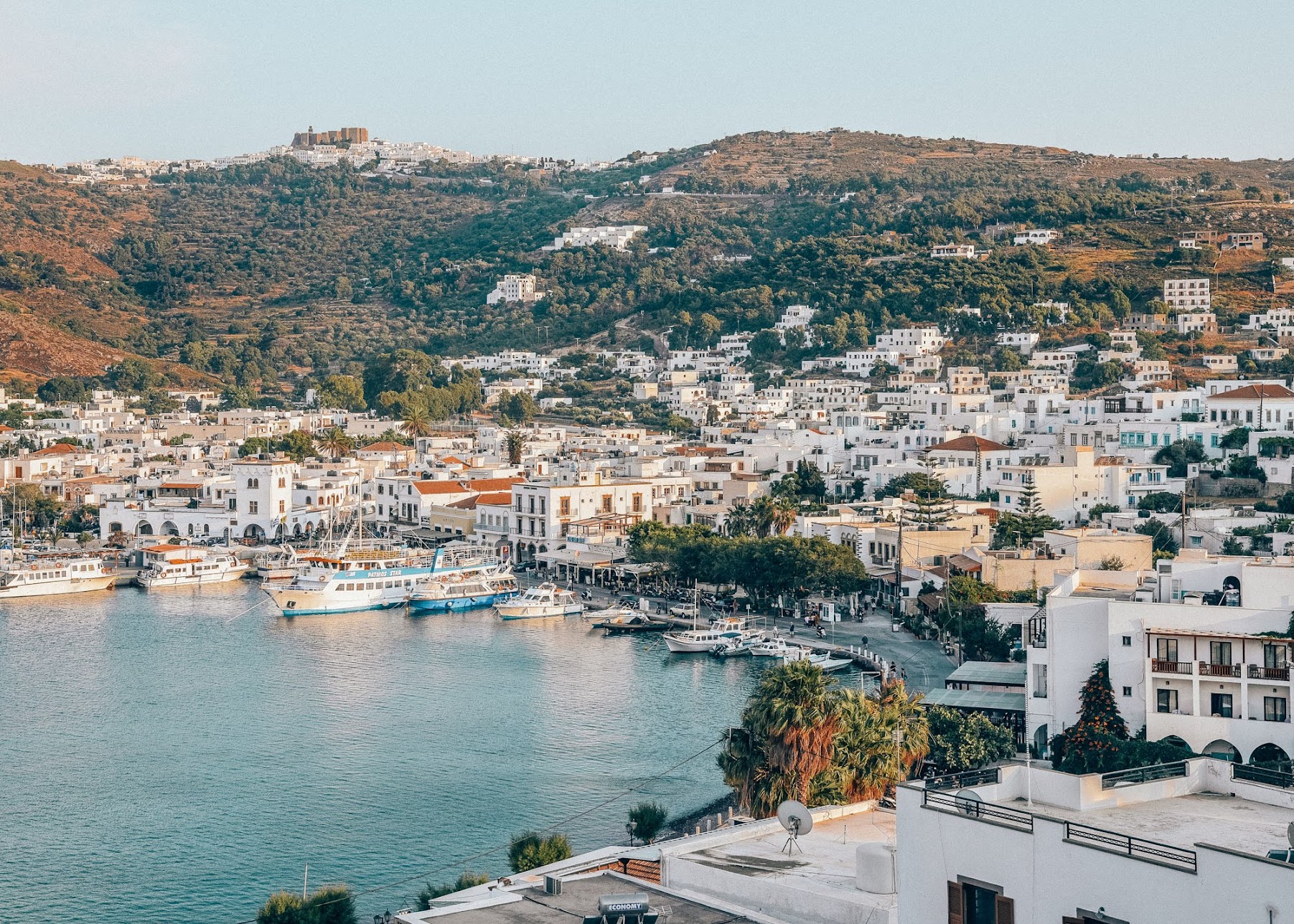 The Monastery of St. John is the first thing you will notice when arriving on Patmos, sitting high on the hill above Chora it is visible from every part of the island. We anchored offshore close to Chora, the capital of the island, and took small  tender boats to the island, as we only had a couple of hours to explore we wasted no time in asking the locals where the best place to eat gyros was.

Chora was built around the imposing fortified Monastery of Saint John during the 12 century, the town came to prominence during the 16 Century when beautiful mansions houses and captain residences were built. These can be seen along side the traditional architecture of lovely whitewashed houses on narrow streets lined with flowers and sleeping cats. 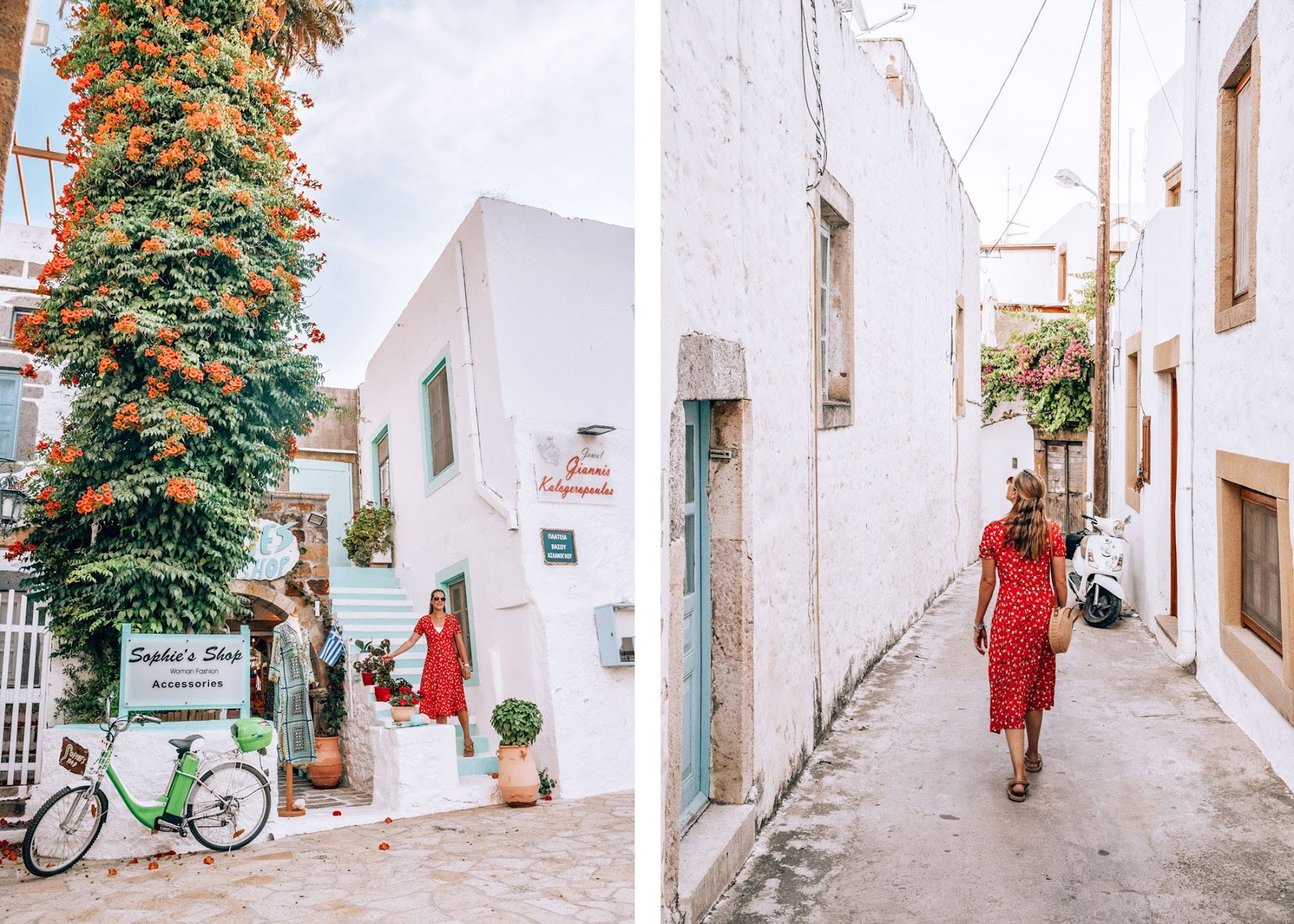 CRETE
The next morning we docked on the island of Crete. We had an excursion planned for the Palace of Knossos, Crete’s most famous historical attraction.

If you have an excursion booked on the boat, you get to depart first. If you have no excursions planned and you’re just going to explore you need to get a ticket a couple of hours before each stop. This ticket will have a number on and this will be the boat number that you’ll leave on. ie: If you have ticket number 1 then you leave on boat number 1 which will be the first to depart. We were lucky we had tickets 1 and 2 our whole trip (thanks to Duygu and ilker for queuing to get them every day!) so each time we managed to get off the boat quite quickly, which is important as you don’t get that much time in each place. 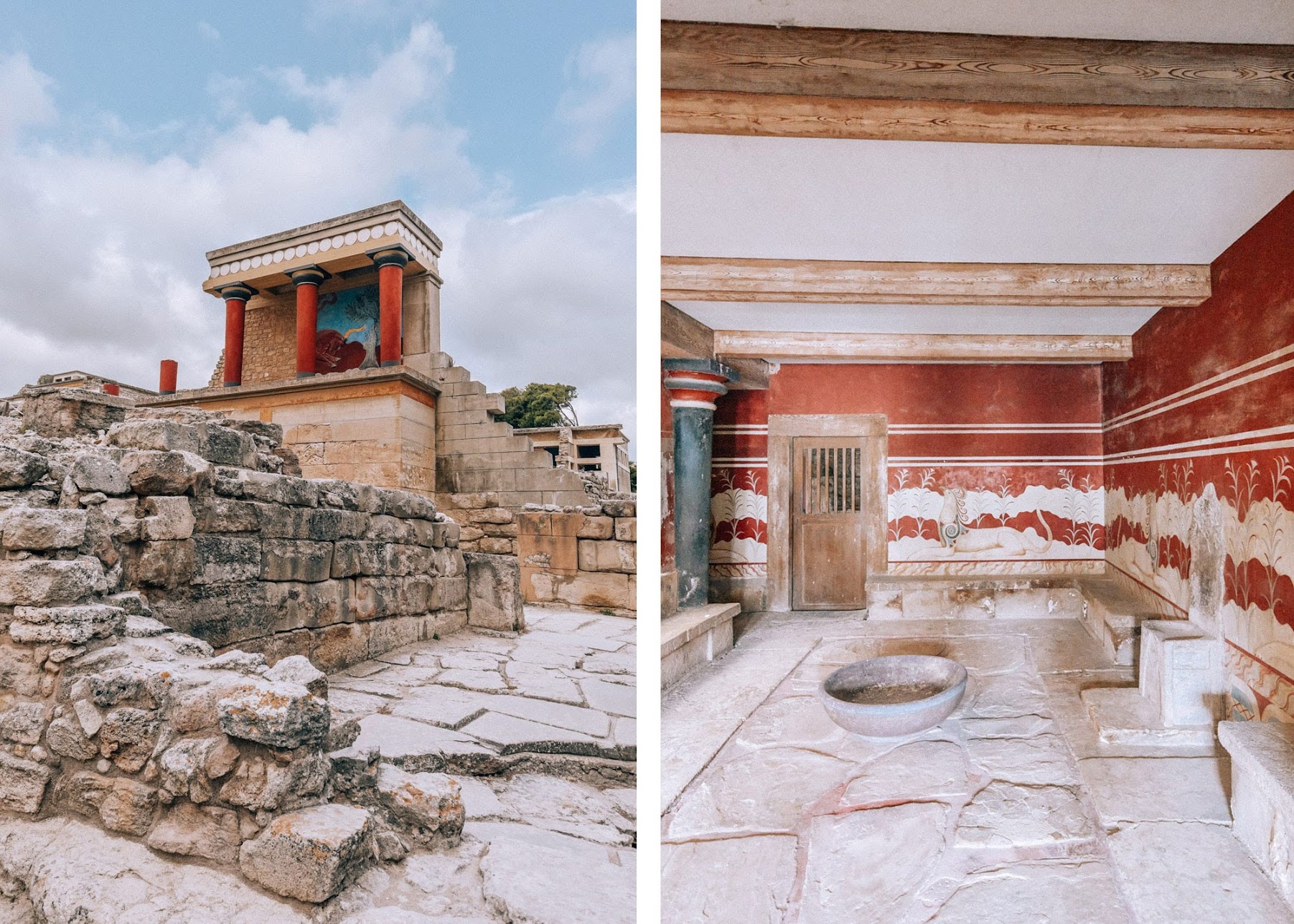 Knossos, the famous Minoan Palace lies five kilometers southeast of Heraklion, in the valley of the river Kairatos, in Crete. Ιn Greek mythology, the Palace of Knossos was the residence of the mythical King Minos, the son of Zeus and Europa.

After we had a tour of the palace we had some free time to wander around the city of Heraklion. It was Sunday so most of the shops were closed but there were lots of cafes open and you could walk down to the The Venetian harbour of Heraklion. 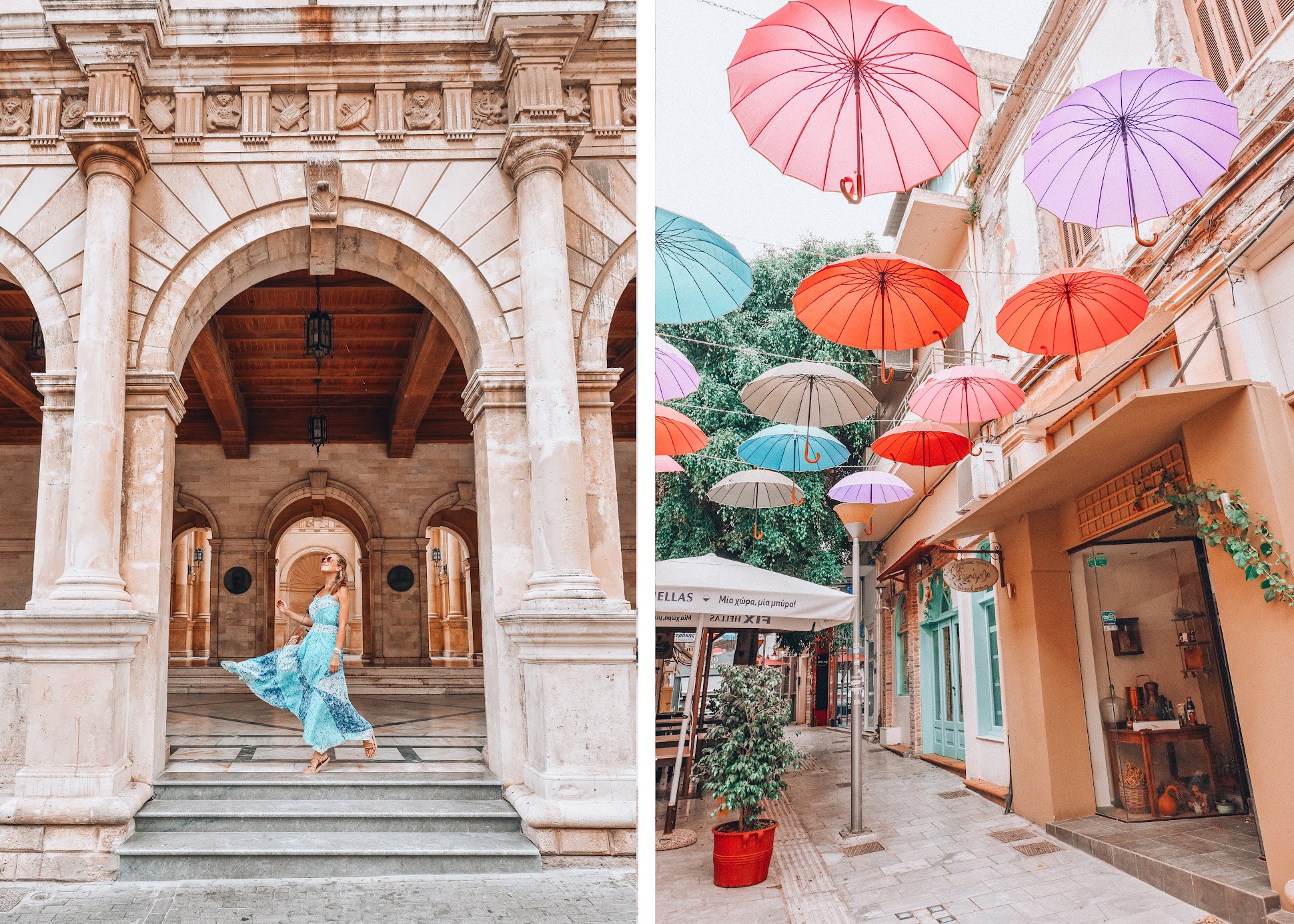 SANTORINI
That afternoon we arrived in Santorini. Santorini is one of my favourite islands and just generally one of my favourite places in the world. There is nowhere quite like it and if there is one place i’ve been that actually looks better in real life than it does in pictures…it’s Santorini! We anchored offshore below Thira (Fira) and had to get tender boats to the shore. We had ticket number 1 so we made our way to shore first. Once you get to the bottom it’s a long climb up (around 587 steps!) to the top. You have 3 options: walk, donkey ride or cable car. We opted for the cable car which was €6 per person one way. 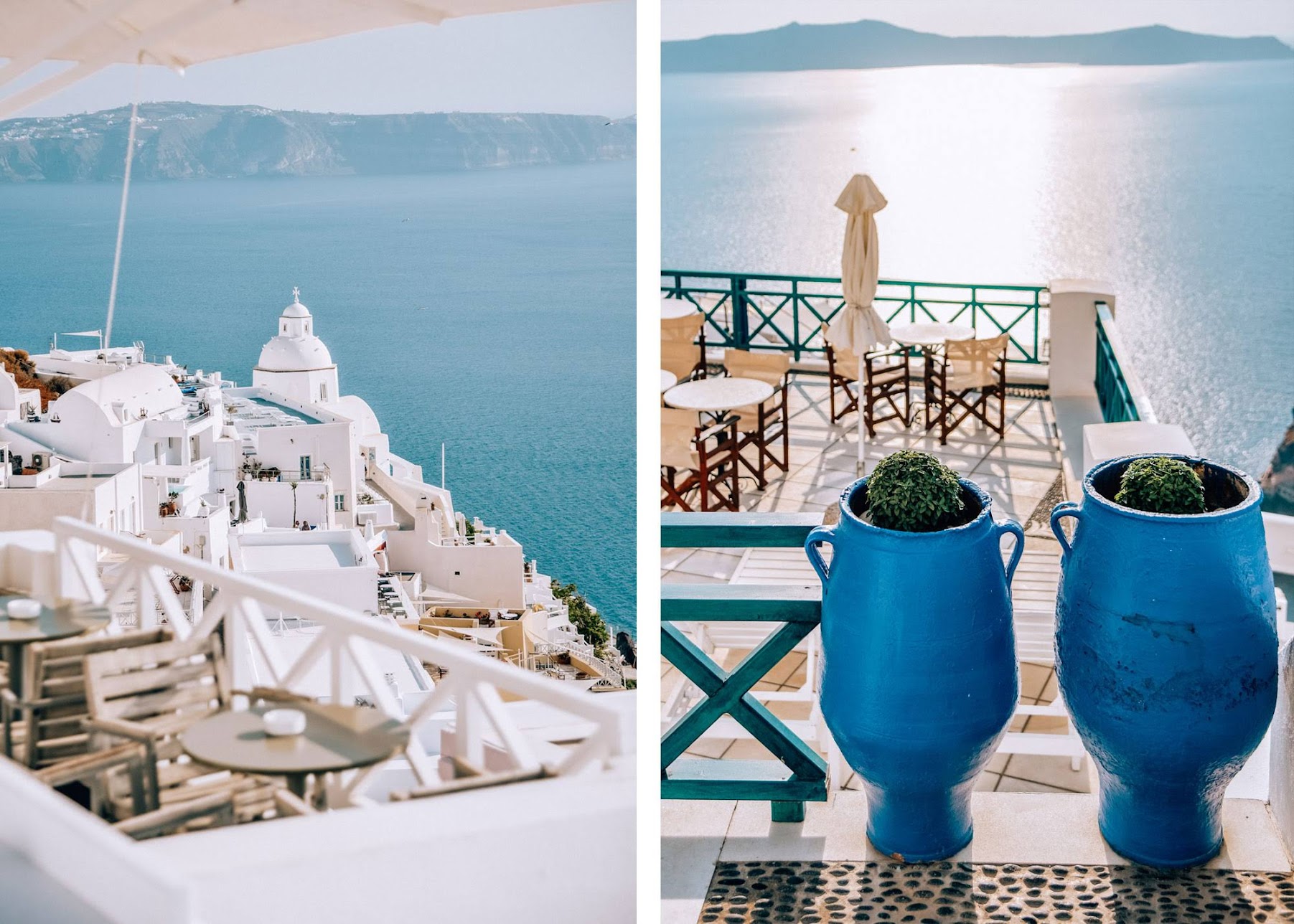 Some of our group decided to visit Oia the famous part of Santorini which is home to all the blue domed churches. As Oia is around 30 minutes in a taxi and we have been there before we decided to stay and explore the white hilltop town of Thira which is less busy but still picture perfect. We spent a few hours discovering all the nooks and crannys, narrow streets, churches and stairways with a view. 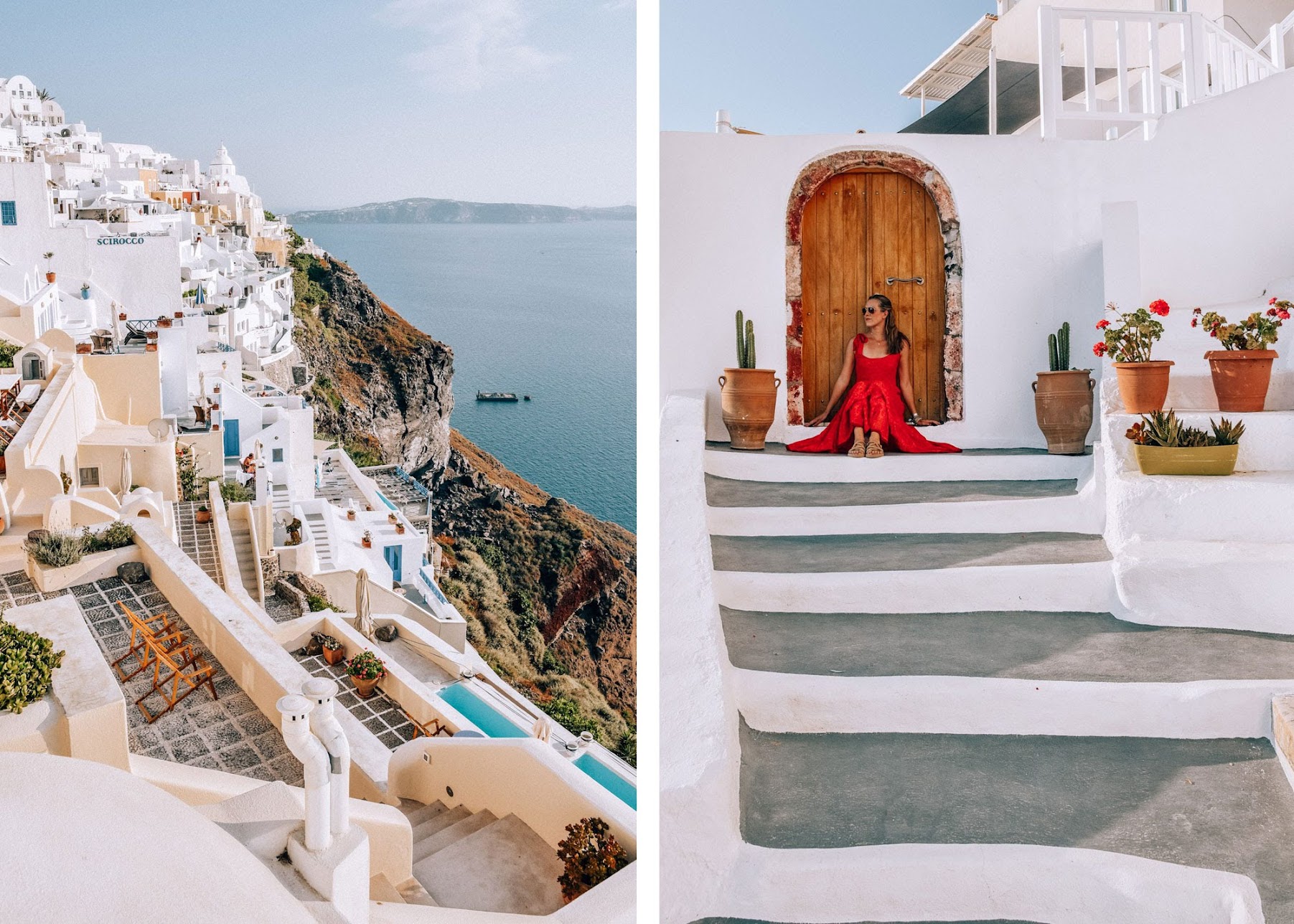 After we had taken 3539709 photos, we grabbed a gyros and a beer, watched the sunset and headed backdown the hill to the ship.

ATHENS
The next morning we docked in the Port of Piraeus in Athens. We spent most of our time wandering around the colourful streets of Plaka which is without a doubt one of the most picturesque neighborhoods in Athens, with its narrow streets, lovely neoclassical buildings, small cafes, traditional tavernas and ancient ruins in almost every corner. We then walked down to Monastiraki square to take some photos before heading back to the bus. 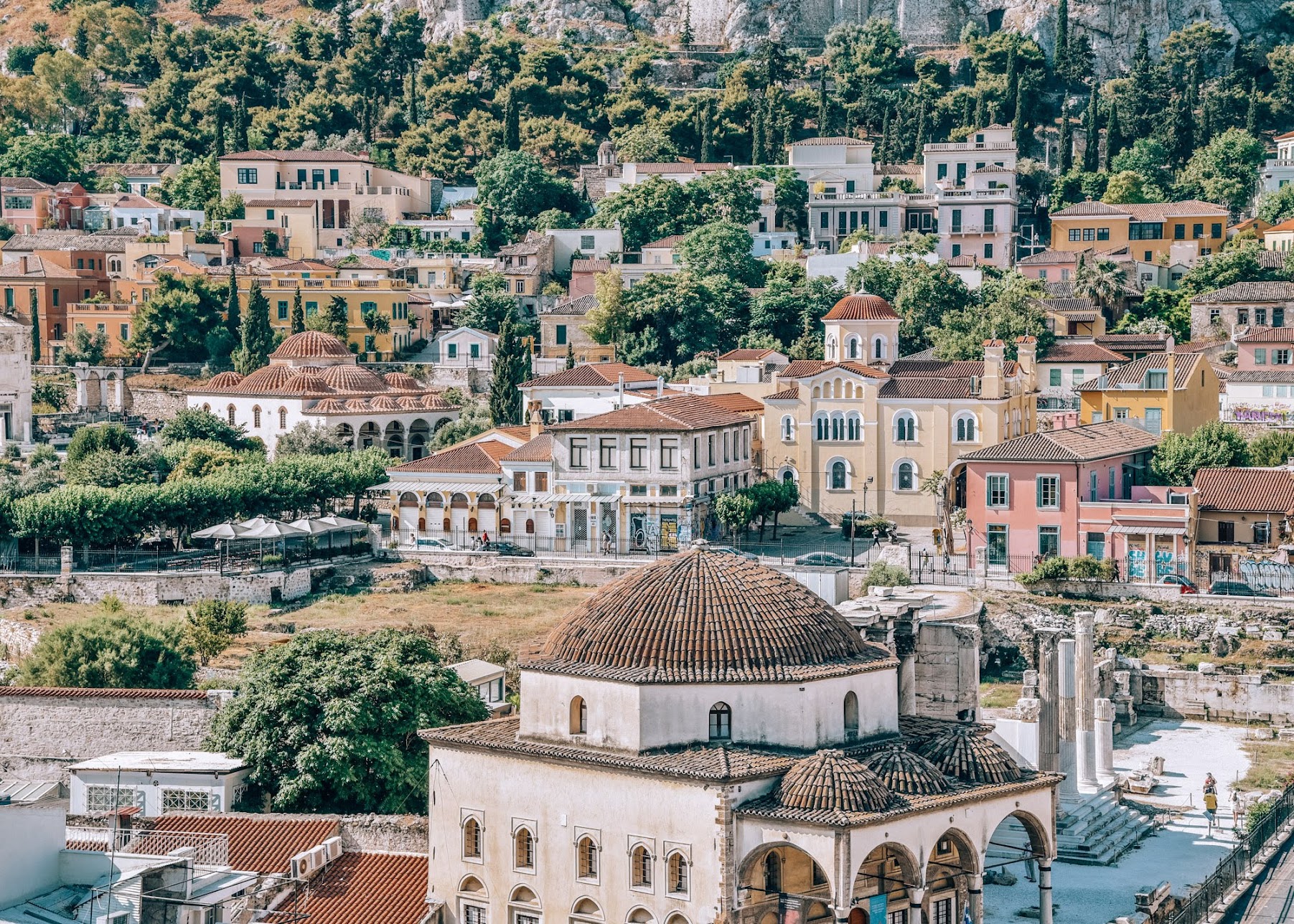 MYKONOS
Our final stop on our 3 day tour was Mykonos. If it was a toss-up between Mykonos and Santorini it would be hard for me to choose which one I like more – both of them are so different yet equally gorgeous. The maze like streets of Mykonos are a photographers dream and you can get lost for hours around each corner soaking up every inch of the bougainvillea drenched lanes. 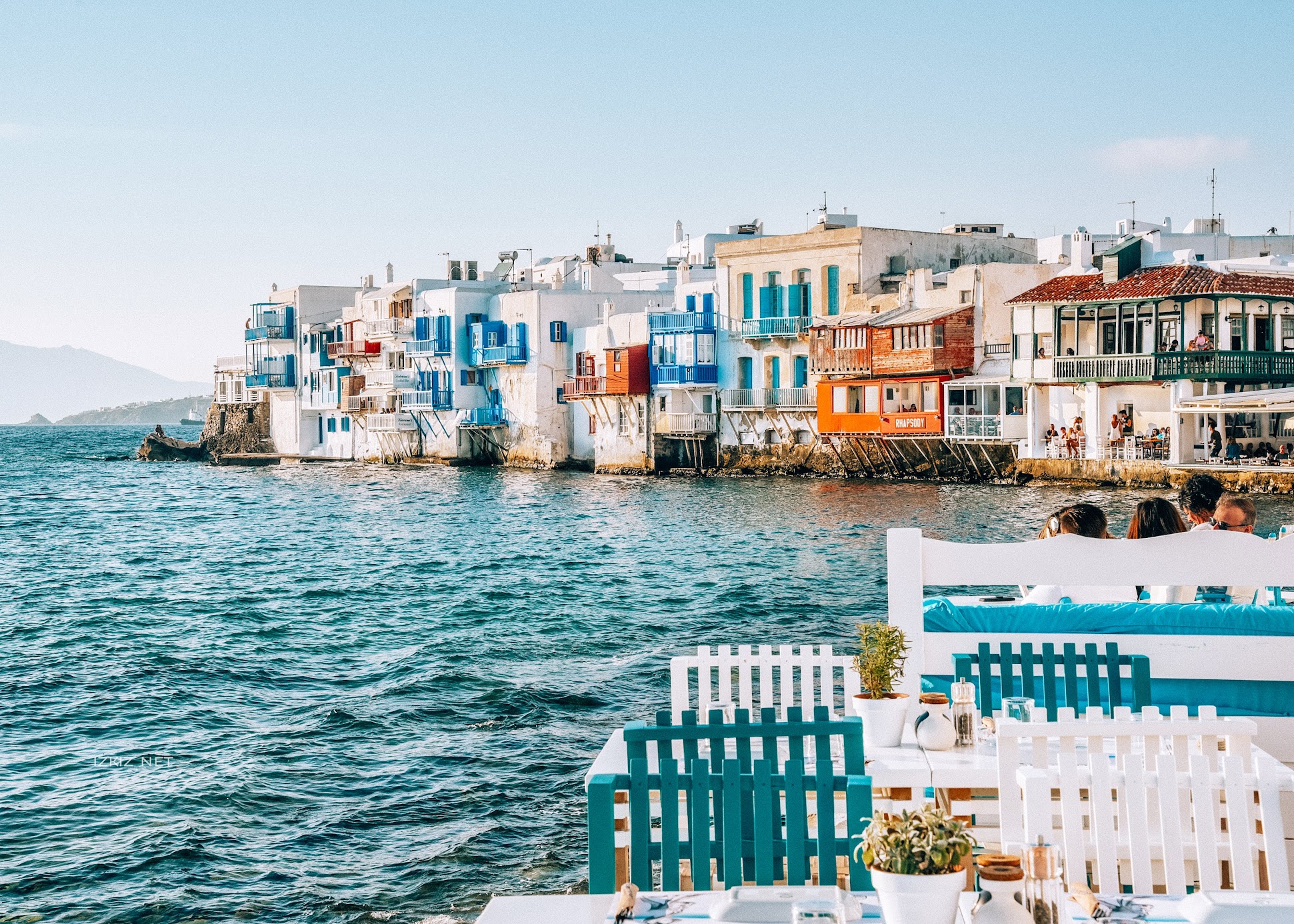 That evening we watched a beautiful sunset from one of the most popular hotels on the island: Cavo Tagoo. They have an incredible infinity pool overlooking the sea and it was one of my favourite moments from our trip. 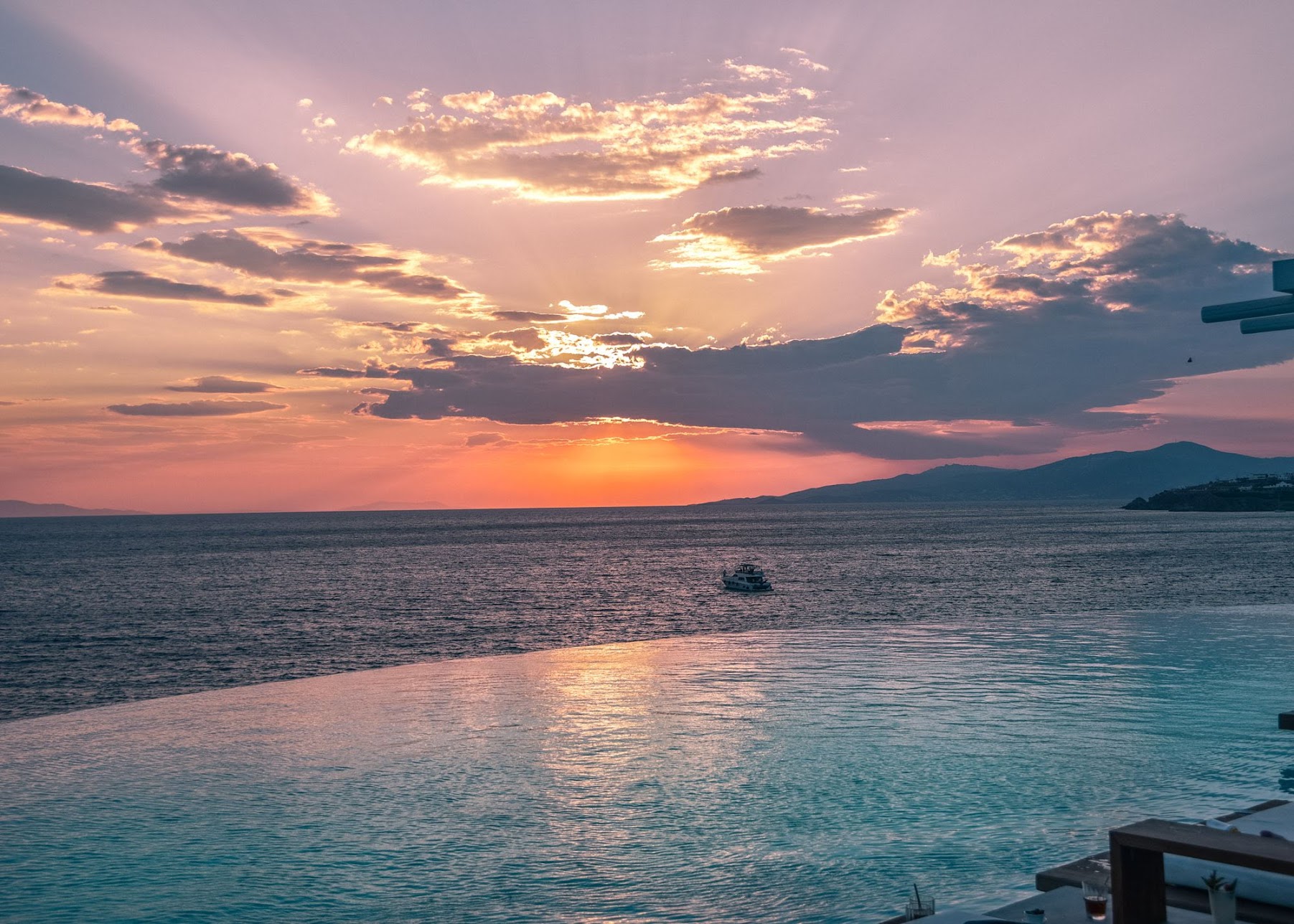 All in all our trip was short but sweet. We enjoyed all the islands we visited and it’s pretty much stress free because almost everything is taken care of for you. The only thing I had to worry about was getting back to the ship on time as I do have a habit of losing track of time when I’m taking photos. 🙂 It was my first ever cruise but I doubt it will be my last!

Thanks to Tatil Sepeti and Vovidi Travel for a fun few days!

Forbes: The 27 Most Beautiful Beaches In The World